The Leon Lett of Soccer 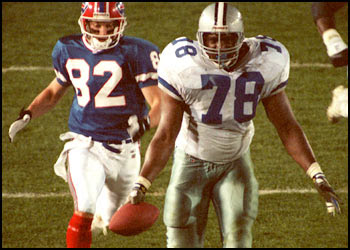 You may not remember who Leon Lett is and the former defensive tackle of the Dallas Cowboys would likely like to keep it that way.

Lett was the man who fell victim to the infamous play in Super Bowl XXVII. Up tons of points in the final quarter of action, the defensive tackle was given the perfect chance to score a rare touchdown when he recovered a fumble on his own side’s 45 yard line. Lett scooped up the ball and sprinted the length of the field towards the end zone. But when the big man was around 10 yards from the goal line he began to slow down and taunt the opposing team’s players by holding the ball in his outstretched hand.

Don Beebe, a Buffalo receiver, hustled the whole way down the field after the big man and at the very last second batted the ball out of Lett’s hand right before he crossed the goal line. the play had no affect on the outcome of the game, but it is considered one of the most humiliating sports plays of all time. Lett was attempting to show up the opposing team by his antics; Beebe never gave up and reversed the celebration on the cocky defender. And as a result Dallas still won the game, but fell a few points short of the Super Bowl record for points scored in a game.

Well today in another sport, Lett may finally have been outdone.

In the Moroccan soccer league, Maghreb Fez and FAR Rabat recently battled for a spot to advance to the quarterfinals of their domestic league Cup titled Coupe du Trone. The two side’s were tied at the end of extra time and as a result battled in a shootout to advance to the next round of the tournament. During the tense overtime shootout FAR goalkeeper Khalid Askri made a critical stop or at least he thought he had made one. Askri dove and saved the shot fired by an Maghreb Fez player, but instead of assuring that the spinning ball had not crossed the goal line he decided to begin celebrating. With his back to the rolling ball and the goal itself, Askri began to pound his chest and pump up the crowd behind the goal post. What the keeper did not know is that the ball took a bizarre spin towards the goal line while he celebrated. The ball slowly rolled into the goal while Askri continued to celebrate with his back to the action. The opposing team’s shooter began to motion to the referee who eventually agreed that the goal was legitimate.

And unlike Leon Lett’s legendary blunder in the Super Bowl, Askri’s side ended up losing the match and the shootout 7-6 due to the pre-celebration.