The Laws of Soccer 101: The Technical Area 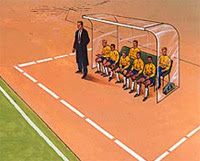 In our second to last installment of “The Laws of Soccer 101” before our Final Exam, I wanted to address the second appendix-like rule tacked into the rulebook that is not actually characterized as a “Law”. I guess the fact that this short provision is not a “Law” is a technicality though, because I am speaking about the “Technical Area.” What’s that?

It’s technically the area of the sidelines where the manager and his team’s subs chill while watching the squad’s best eleven sprint around the field in chase of glory. It’s not complex, it’s just where people sit. If this was the NBA, it would be “the bench”. If it were MLB, it would be the “bullpen”. If this was American football, it would be the “sidelines”.

Hey, we weren’t that creative when it came to our football. Give us a break.

Here’s your second to last Pop Quiz Question before your big Final Exam. Which of the following people is allowed to be in the “technical area” according to FIFA:

A. Coaches;
B. Substitutes;
C. Physiotherapists; or
D. All of the Above.

It’s (D). That’s (D), as in “dang, I wish he would actually come up with a real quiz question before the big Final Exam”. You won’t get one from me. But, I’ll give you another hint at least. Did you know there is a one meter area between where the touchlines end and the technical area begins? What is this area called? It’s sort of a Bermuda Triangle without a real name (other than “out of play”, which encompasses everything). My suggestion for a name? Well…

The “sidelines”, of course. Like I said, we lack imagination.