The Joke Is On Anelka 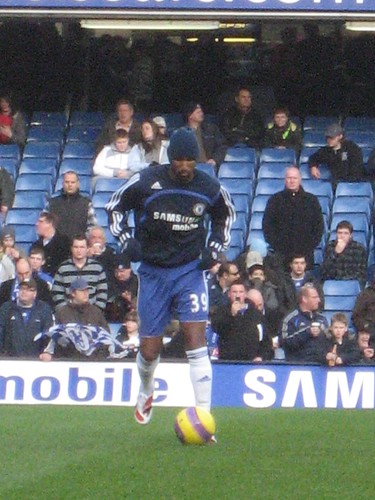 Nicolas Anelka is “laughing” at the FFF for suspending him eighteen matches. Laughing? Shouldn’t he be crying? Or at least feel disappointed? Maybe perturbed or perhaps even embarrassed or ashamed?

It seems as if the Incredible Sulk is quite confused about what actually happened this summer and I don’t think the guy understands that he is the punchline.

Of course this is the same guy that recently announced that the only mistake made was by Domenech for not playing the star in his perfect position on the pitch. Well boo-hoo! Apparently Anelka only wants to touch the ball in the box directly in front of the goal and if he doesn’t get that opportunity then his role on the team isn’t fair.

Sounds like the way a petulant child behaves when not given the ball on the playground at recess, but then again has Anelka really ever proven to act any differently? He certainly isn’t brushing off his toe-poker label by making such an accusation. And I will admit the French side’s coach was a major part of their problem this summer, but it will be Anelka’s actions that will be remembered for many years following this summer.

Bad coaches are a dime a dozen and will continue to exist for centuries down the road. But athletes that become a national or even global disgrace to their sport will be remembered for years to come.

Anelka had some words regarding his 18 game suspension for his unpleasant conduct this summer and the forward attempted to make it seem as if he had already officially retired from international football for good when in reality he had not and was forced to leave South Africa this summer.

This whole thing is a nonsense, to turn the page because [new coach] Laurent Blanc needs to be able to work in peace. These people are clowns. I’m dying with laughter. The whole commission thing is a charade not to lose face.

Clowns? For suspending a player that embarrassed his country? For punishing a selfish fool that doesn’t understand his own lasting negative image on the sport that he has dedicated his life too. If the commission is a charade then what was the locker room tirade this summer. A noble act?

Anelka’s international days are done and the funniest thing about it is nobody will miss the Chelsea man.  And that includes all of France.