The Eye in the Sky Doesn’t Lie 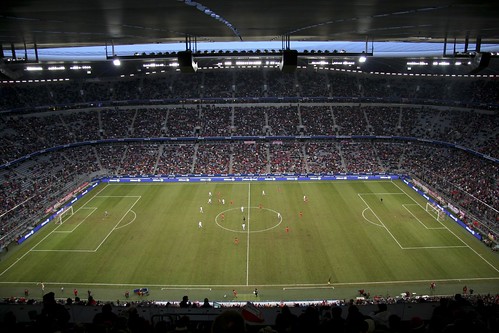 In American football they often say that the eye in the sky doesn’t lie.

The reason why they say this is because:

A) It sounds really cool rolling off the tongue.

B) It means that the aerial video footage of a play tells the real story.

Often over the year I have complained about the way football officials operate.  Let’s face it.  There is way too much going on with way too many players for a few officials to properly judge.  Often in the biggest matches of the season the refs miss the biggest calls.  Offsides is a drop in the bucket.  It is missed nearly every other game at some critical point in the Champions League and countless times a player scores a goal that should have been blown dead due to the penalty.  In fact the one goal that Barca scored earlier in the week never should have counted.

Offsides goals could easily be avoided if refs were overturned due to video footage.

The second thing that always grinds my gears is that refs seem way to vulnerable to pull the red card on a guy that they obviously didn’t see commit the foul.  This happened to Inter against Barca and fortunately the lousy call didn’t affect the match completely.  Players that dive should never be rewarded and such things should be overturned if it is obvious that the call was made wrong.

These matches are just too big to mess up something this simple.  Most sports have adapted to the times and it’s not just a NFL trend anymore.  Baseball, hockey, basketball, football, and several Olympic events have  instant replay review, so why not the world’s biggest and best sport?

In a game as holy as European football, they need a god like system to assure perfection in the sport.  The technology is their folks.  Now something just needs to be done.

Because the eye in the sky doesn’t lie.