The case of the Manchester United defence 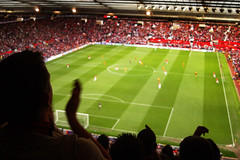 In 2006-07 Patrice Evra and Nemanja Vidic finally settled into the Manchester United side and Sir Alex Ferguson’s men won the club its first league title for four seasons. The following season in 2007-08 Manchester United won the league on the back of a superb defensively display allied to an incredible offensive performance from Cristiano Ronaldo. One of the reasons Cristiano Ronaldo was afforded so much attacking freedom that season, he scored forty two goals in total, was because of the exceptional defensive basis on which that side was built. Unsurprisingly that team also went on to win the UEFA Champions League. The next season in 2008-09 Manchester United again won the league. At one part during that season Manchester United did not concede in the league for over twenty two hours of football. 1,334 minutes! It was an English football record. Last season, Rio Ferdinand was consistently injured, Nemanja Vidic struggled for form (regularly linked with a transfer away from Old Trafford) and John O’Shea was not so commanding at right back (because of injury and poor performance). Patrice Evra was the only one of the first choice Manchester United defensive four who performed at a consistently good standard. Not surprisingly Manchester United didn’t win the league for the first time in four seasons.

For the three seasons previous to the last Manchester United had been Champions League semi finalists, runners up and winners. Last season the defence capitulated in the final moments in the Allianz Arena in Munich and the team wasted an away goal advantage into a demoralising defeat. In the return home leg the defence was again sloppy, allowing Bayern Munich to come back from 3-0 down to a tie winning position of 3-2 (Bayern Munich progressed to the next round because the 4-4 final aggregate score favoured them on the away goal rule).

Manchester United against Fulham on Sunday afternoon just reminded the rest of the Premiership what every Manchester United fan already thought. This Manchester United defence is struggling. Without Rio Ferdinand by his side Nemanja Vidic appears an inferior player. John O’Shea plays like a deputy right back even when he is the first choice. He is capable and solid enough but not quite the right sided equivalent of Patrice Evra. Johnny Evans has consistently performed well for Manchester United when asked to deputise for an injured Rio Ferdinand for the odd flurry of games but when he becomes an automatic starter, aware he is likely to start for a period of several games, he appears to lower his concentration level to the detriment of the team. In terms of the alternatives, Wes Brown is a long way from the formidable form he showed in 2007-08, Gary Neville was reduced to a shadow of his former self a couple of years ago, never mind now, and the likes of Rafael and Fabio are nowhere near the required level defensively. Offensively the pair offer plenty, incisive pacey running and decent crossing, but they still aren’t sure of their positions when defending and appear uncomfortable in the tackle, diving in when it isn’t necessary.

Manchester United need Rio Ferdinand back to offer guidance and composure to the rest of the defence. Alternatively the defensive quartet need to dramatically improve their performance as a collective unit if Manchester United are to have a chance of winning any trophies in the current season.