The Best Players in US WNT History: Who’s #5? 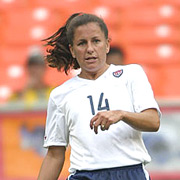 Her Story: It’s tough not to put Joy Fawcett higher up on this list, but I like her here at #5. She grew up in California and was a three time All-American at UC Berkeley. She would join the Nats in 1987 and would serve the squad well until 2004. For almost two decades, she would be a constant fixture on the backline for the powerhouse WNT.

Her Stats: Fawcett is the fourth most capped player in WNT history with a whopping 239 appearances. She scored 27 goals for the team (2nd most for a defender) and played some of the most tenacious defense in team history. Her amazing ability to shut down her opponents’ best players and her tireless effort on the field make her a US legend.

Her Legacy: Fawcett played physical defense for the WNT and her aggressive style and brilliant marking ability would make her a legend. Sure, she didn’t score a ton of goals (though she did have a good nose for the net on set pieces), but she did consistently dominate opponents’ attack and play a huge role on the US WNT’s greatest teams.