The Best Players in US WNT History: Who’s #6? 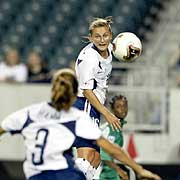 Her Story: Geez, you know the WNT has had some amazing players when Tiffeny Milbrett can’t crack the top five. Milbrett grew up in Oregon and played her college career at Univ. of Portland. In fifteen years with the WNT, Milbrett established herself as a dangerous attacking player. She gets too little recognition in my humble opinion.

Her Stats: Milbrett is fifth all-time on the list in appearances (205), fourth in goals (100), and third in assists (61). Those are some eye-popping stats, for sure. Had she not fallen out of favor with one of the WNT’s coaches, her numbers would be even more staggering too. All in all, she was one of the WNT’s greatest scorers ever, hands down.

Her Trophies: Milbrett is outside the top five on this list because she didn’t win as many trophies as the players above her. She was too young to play in the 1991 World Cup, but she was a member of the 1999 World Cup winning team and the 1996 Gold Medal winning side. She was a fan favorite and an important cog in the WNT machine.

Her Legacy: Though she is not remembered as well as some of the other members of the 1999 WC team, she was actually the team’s goal scoring leader that year and she should be an inspiration to all women players (especially small ones, after all, she’s only 5’2″). She is going to play in the new WPS too at age 36. I bet she scores early and often.