The Best Players in US WNT History: Who’s #2? 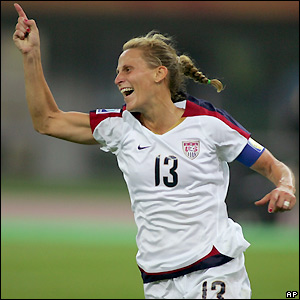 Her Story: Kristine Lilly is my favorite WNT player ever. Born in Connecticut, Lilly has been a member of the WNT for twenty-two years now (a record) and she was the squad’s captain from 2004 until 2008. She has now played in more international matches than any man or woman in world history, and she has performed well in all of them.

Her Stats: Lilly doesn’t just hold the US WNT record for appearances with 326, she holds the record for the entire world. No one, anywhere, has played as many games as Lilly. During those games, she has performed amazingly, scoring 122 goals (2nd in WNT history) and notching 96 assists (also 2nd). Sometimes, I wonder if she can be human.

Her Legacy: Lilly’s legacy is already lengthy, but it’s growing even still. She still plays for the Nats and in the new WPS. The reason her influence is so strong (and her career so long) is because of her tireless work ethic. I must admit, I really wanted to make the WNT’s “Iron Horse” the #1 player, but I couldn’t deny that superstar her spot. Tune in tomorrow to find out who it is (as if you already don’t know).