The Best of the Rest of My Soccer Blogs 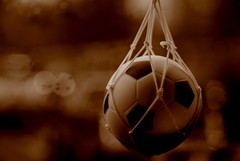 It is time for me to hang up my sack of metaphorical soccer blogging balls (I couldn’t resist just one last bad bawdy pun), and it is with sadness that I say goodbye to you today. I enjoyed sharing my passion for soccer with you on this site, and I hope you enjoyed my Best US Soccer Blogs and my Best World Soccer Blogs. It is now time for me to take my balls and go though (OK, one more), but first I will reveal the best stuff I wrote about anything and everything.

Here are the 10 Best of the Rest of My Soccer Blogs/Series:

10. The Laws of Soccer 101: In this scholarly series, I analyzed every single rule in FIFA’s Laws of the Game. If you think you know the Laws of Soccer, take my Final Exam. It’s easy, but I bet most MLS refs couldn’t “pass” it (zing!).

9. Ramon Calderon May Be Blind/A Picture Is Worth 1,000 Calderon Jokes: These were some of the first posts I ever wrote for STO, and I think they are as hilarious. After all, you can’t look at Nic Cage with a ‘stache and not laugh.

8. Red Cleat Diaries: In this sexy series (well, as sexy as you can get with pictures of Duchovny), I fantasized about what it would have been like if America’s best football, tennis, basketball, and swimming stars had played soccer.

6. Heaven Can’t Wait: One day while I sat with my laptop on a hotel balcony in Mexico (while my wife was hugging the toilet in the room with Montezuma’s Revenge), I crafted this pretty piece which is equal parts fiction and non-fiction.

5. Doc Brown’s Predictions Series: Great Scott! Did I write almost a baker’s dozen stream-of-conscious narratives from Doc Brown’s perspective? Sure, Doc Brown wasn’t right often, but at least he was wrong with style. Like a De Lorean.

4. Twas the Christmas Before the 2010 World Cup: Last Christmas, I treated all the (naughty and nice) boys and girls out there to a poetic retelling of a classic yuletide tale about old St. Skeletor. I think I had too much eggnog that night.

3. STO Soccer Film Reviews: The Yank’s inner Roger Ebert crafted this series of a score of posts about films that featured soccer. I think I recommended two or three, and definitely not Victory, She’s the Man, or Soccer Dog.

2. What’s So Super About Being Super?: One day I had nothing to do, so while I watched hours upon hours of soccer, I crafted this post, which I think is the best one I wrote for these sites. It shows what I could do with one whole day.

1. The Best Facial Hair in Soccer History: I also wrote all of these posts in one day. That’s right, in order to create my favorite series ever (and probably the funniest posts I ever wrote), I shaved my ugly mug into five different forms of unfortunate facial hair in a 24 hour period and blogged the results. I trimmed into the tidy beard, the handlebar mustache, the traditional ‘stache, the hobo beard and the ginger goatee. It was truly a transcendent series on soccer.

Luckily for all of you, the pictures of me did not survive the site upgrade. Thank God (and some flaw in WordPress). I wouldn’t want to expose you to those ever again, no, never never! Someday, I will show these posts to my baby daughter though and tell her about how daddy was once a soccer blogger. Unfortunately for her, I will likely still have the original photos so she will have to deal with the entire pictoral accompaniment. Trust me, it wasn’t pretty.

It is now time for me to hit the proverbial showers. And no, I am not going to make one last bawdy joke about “dropping the soap.” Geez, what do you take me for, some sort of weirdo? Anyways (and this is my last “anyways” of all-time), thank you to everyone once again for your support over the span of my soccer blogging career, and please keep coming back to STO and its sister sites for the best news and analysis all over the globe regarding the beautiful game.