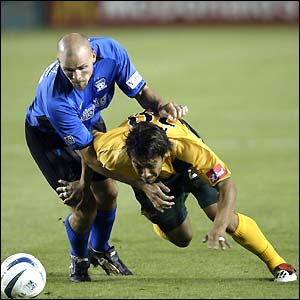 The 2003 San Jose Earthquakes narrowly missed winning the Supporters Shield (they were runners-up to the Fire by a mere two points), but they did forge ahead and capture their club’s second MLS Cup in three years. They did it with heart and determination, and that’s why they’re #5 on this list.

Landon Donovan only played in 22 games in 2003, but he made the most of them. Donovan scored 12 goals (5 game winners) and notched six assists to lead SJE offensively. Brian Mullan would also have a breakout season, and Pat Onstad continued to be perhaps the best keeper in MLS.

Onstad, when coupled with the league’s best backline, made it nearly impossible for opponents to score. The team gave up the fewest goals in the league while playing amazingly foul free soccer (their most penalized defender, Craig Waibel, received a mere seven cautions the entire season).

SJE was 7-3-5 on the road in 2003, which remains one of the best road winning percentages in league history. In fact, they may be one of the only MLS teams to fare better on the road than at home for an entire season. They got it done wherever they played, and that’s why they’re #5.