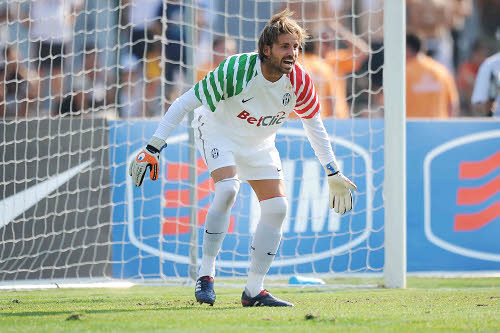 Twist of fate seems to arrive in Marco Storari’s season as after deciding to leave Ac Milan in the summer for a playing time opportunity in Juventus, the keeper reportedly plans the same thing this winter after Gianluigi Buffon returns from his long injury last weekend.

Reports in Italy suggested that the 34-years-old shot stopper is considering Genoa as his new destination knowing that the ambitious club are looking for a new goalie due to the poor performances of their current number one, Eduardo.

Having Buffon back behind the goal surely makes Juve feel secure and will likely to let Storari go should there’s a good offer comes for the Zebra squad that reportedly are willing to do business for around 4 million Euro. Should the Bianconeri do decide to sell the former Sampdoria and Milan keeper, the Turin giant are reportedly readying a bid for Cagliari’s outcast, Federico Marchetti, who apparently has also been approached by Genoa.

Reports claimed that despite already making talks with Marchetti, Genoa apparently have turned their attention to Storari, who is surely more experienced in Serie A and is definitely much more match fit than the Cagliari keeper. As for the 34-years-old picking to play with the Griffone would definitely be something he’ll cherished as the shot stopper has had a pretty good season so far and deserved to have a first time football rather than just being a backup keeper.

Should Storari decided to stay in Juve, there’s definitely not much playing time he’ll get unless Buffon is back in the treatment room considering that Juventus doesn’t really had much playing agenda after crashing out from the Europa League. The only competition in which the ex-Sampdoria keeper could probably feature is in the Italian Cup, but games are not that much also in that competition which means the goalie will be spending plenty of time in the bench despite already proving as a first team material player so far.