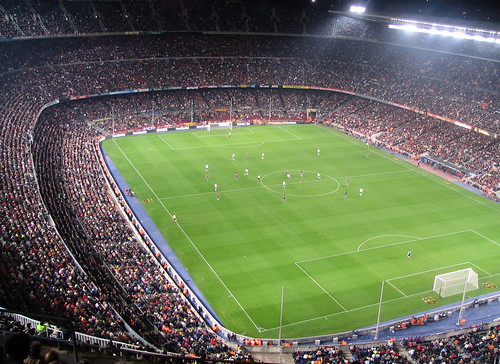 Well the next World Cup hosting nation has already been decided and the next decade looks to be a big deal in Brazil between the 2014 World Cup and 2016 Summer Olympics.

But the 2018 and 2022 World Cups are both still undecided and several respected nations have entered the paperwork to be considered for the honor of hosting the world’s biggest sporting event.

And Spain-Portugal have in a joint effort decided to run together and the two nations look like a significant force considering between the two countries they have seven elite category stadiums including one of the world’s biggest and best in Barcelona’s Camp Nou. And the Spain-Portugal bid is the seventh and final one in Europe to be inspected by FIFA officials and the organization is currently evaluating the nation’s stadiums, transportation systems, and security plans.

And the featured cities from the two nations to be considered for the event are Madrid and Barcelona in Spain and Porto and Lisbon in Portugal. FIFA is expected to visit all four cities in the upcoming weeks and all four cities are well respected for their rich football history.

And of the leading candidates to earn one of the two vacant World Cup locations, Spain-Portugal has to be considered near the top of the list. England is among the front runners for the 2018 World Cup, but their bid could be affected by the fact that they recently won the 2012 Summer Olympics although such a notion did not hurt Brazil regarding their dual hosting of both the Cup and the Olympics. The United States is always a reliable front runner as well considering the great number of elite stadiums in the nation with the newest being the state of the art Dallas Cowboys stadium erected in Texas, but the USA did recently host the World Cup in the 1990’s and that could hurt their chances of being awarded yet another World Cup bid.

But with two football rich cultures, Spain-Portugal seems to have become a front runner for the World Cup at some point down the road.