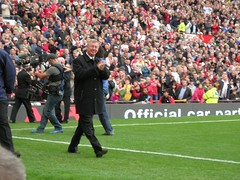 Nemanja Vidic has signed a new contract with Manchester United. It will mean he is tied to the club until 2014, a further four seasons, and is paid an increased wage. It appears his weekly wage will be close to £90,000 a week. Apparently this is still substantially less than Rio Ferdinand is paid but Nemanja Vidic has to appreciate he does not have the same public profile or status that Rio Ferdinand, the England captain, enjoys. Notwithstanding, Manchester United fans appreciate him tremendously and consider him one of the best defenders in the clubs history. Vidic’s agent, Pablo Fabbri, suggested the player was open to a move to a club in Spain or Italy but most believed he was just angling for a pay increase for his client. His strategy worked and Vidic is now one of the best paid players in the English Premiership.

Nemanja Vidic had been linked, in the past year, with moves to AC Milan, Internazionale Milan, Barcelona and Real Madrid. Manchester United’s gain is all of these clubs loss. Defensively Manchester United now appear well set for the entire season and the foreseeable future. In each defensive position they have numerous options. At right back Sir Alex Ferguson can choose between Rafael da Silva, Gary Neville, Wes Brown and John O’Shea. At left back Manchester United can choose between Fabio da Silva and Patrice Evra. In central defence there is Rio Ferdinand, Nemanja Vidic, Johnny Evans and Chris Smalling. Youngsters Corey Evans and Richie da Laet are also options. Finding playing time for all of these players will not be easy.

Having such a large number of defenders is important though. Gary Neville is probably now more valued for his experience off the field, Chris Smalling is a player for the future, Rio Ferdinand is injury prone (today it was confirmed he will not return to action until September) and Wes Brown and John O’Shea are returning from long term injuries.