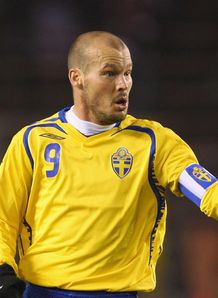 Seattle Sounders FC made a lot of noise (oh pun!) this offseason with some high profile signings, and none was bigger than Freddie Ljungberg, their 31 year old Designated Player (a former West Ham and Arsenal star). Back around the turn of the century, Freddie was one of the best mids in Europe.

But that was eight years ago and many people questioned whether Seattle should have paid such a high price for Ljungberg due to his loss of form at West Ham and his advanced age. But, the Sounders wanted Freddie, who I call “The Swedish Becks”, so they paid the big bucks to procure him.

Well, the “I told you so’s” are starting to rain down on Seattle (pun #2). Ljungberg recently “reinjured” his hip, and two weeks ago he underwent surgery which will put him out for three to four months and could prevent him from playing in the Sounders’ inaugural game next March.

Now, Ljungberg could still make an impact for Seattle next year (if he rehabs his ass off), but it’s more likely this injury will linger and limit his effectiveness. It’s a shame for Seattle, and I wish Freddie a speedy recovery. But I swear, somewhere Hammers’ fans are hamming it up (worst pun yet).