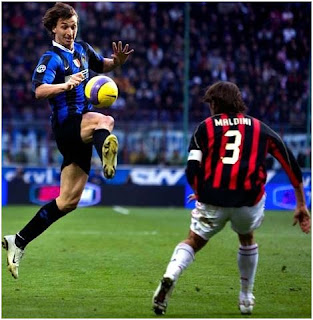 In the Week 2 Game of the Week, Inter spanked AC Milan 4-0.  So much for the championship’s squad mediocre offense in this one.  Towards the end of the first half when Inter was already in a commanding 2-0 lead Milan’s Gattuso was sent off and Leonardo’s squad was forced to play a man down for the entire second half.  A disappointing, but expected result for the reeling club.

Bari was able to battle Bologna to a 0-0 draw.  Making it two straight weeks with an earned point for the new squad.  Fiorentina was able to edge out Palermo at home in a 1-0 finish thanks to a Jovetic goal in the first half.  Napoli put on an excellent offensive display with a 3-1 victory over new boys Livorno (who still search for the first win).   Genoa was able to steal one away from Atalanta in a road match that they would go on to win 1-0.

And in another critical match Juventus would route Roma 3-1 thanks to two Diego goals in the match.  If Juventus can put up offense like that then look out for them this season.  Sampdoria was the better team in another close battle against Udinese and despite Di Natale scoring once again it would be Cassano that would put the final shot into the net.  Sampdoria cruises to a home victory 3-1.  Julio Cruz continues to show Lazio that they transferred for the right man.  The club won 2-1 over Chievo on the road.  And Siena would also impress on the road this last weekend, comfortably winning 3-1 over Cagliari.  And in the final game of the week, Parma achieved their first Serie A victory since promotion in a 2-1 victory over Catania.