Where Did You Go, Alberto Gilardino? 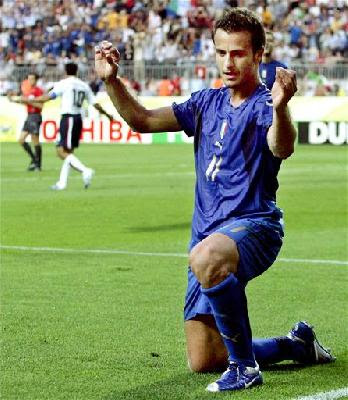 2005 Serie A Player of the Year Alberto Gilardino is already an Italian legend, but is the young man’s best days as a footballer well behind him?  At 27 years of age Gilardino has incredibly already surpassed 100 career goals and the forward was also a valuable member of the 2006 World Cup winning Italian team in Germany.

Gilardino has also made his fair share of Serie A rounds and has played for AC Milan, Parma, and the striker is currently a member of Fiorentina.  Although Gilardino has never been part of a Serie A title winning club the outstanding forward has hoisted up a Champions League trophy when he was with AC Milan and has won several individual awards over the years.

But the forwards best years were arguably with Parma from 2003 through 2005.  During those two seasons Gilardino would score 46 goals for the club combined (he was the runner-up both seasons).  Two seasons ago during his first of three with Fiorentina, Gilardino would score 19 goals and last season the twenty-seven year old finished with a strong effort of 15 despite his team taking a slight tumble down the league table.

But the last six months have been rough on Gilardino. The popular World Cup winner and phenom scorer of Serie A would score zero goals this World Cup despite two out of three starts for his reeling club. The final match which his side lost to Slovakia 2-1, Gilardino would see zero minutes on the pitch and the young forward was considered one of the many big disappointments this summer for the Azurri. Following a disappointing league season for his club and an embarrassing first round exit for his country, Gilardino has only managed to score 2 goals this Serie A season in 7 appearances for his last place Fiorentina side.

Injuries have slowed down the national team regular and this season his side faces some serious obstacles to overcome with only 7 goals in 7 matches so far this season. There is a lot of football still left to be played, but it appears that Gilardino’s numbers are declining every season along with his team’s record.