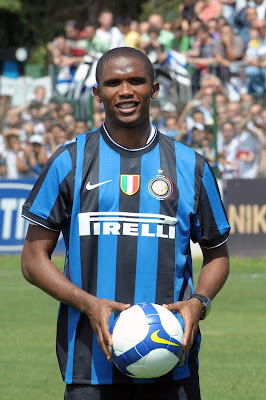 Samuel Eto’o has made the news in the last week for rather embarrassing reasons. The Inter star was caught on replay head-butting an opposing player and has been suspended for three matches because of the incident.

And unfortunately the suspended play dampers what has been a brilliant season by the former Barca man. Eto’o has 18 goals this season for Inter and the forward has been one of the few bright spots to the 6th place club. But let’s take a moment to take a look at Eto’o career numbers.

Samuel Eto’o was nothing short of phenomenal in his brief career for Barcelona and by being dealt for Zlatan Ibrahimovic that should be proof enough that he is one of the best players in the entire world.

If you rank Eto’o up against all these Italian legends of Serie A he is clipping at their heals in total goals.  Eto’o was at 168 total goals going into the end of October and the Cameron star has also surpassed 200 goals for his league career including tournaments.  What is most surprising though is that Eto’o is only twenty-eight years old; whereas most of these Italian stars are at a minimum thirty-three years old.

Of course this ridiculous goal scoring pace is never hurt when you play around the type of team that Eto’o did over the last five seasons.  But scoring over 100 goals in five years with any club should be considered an unbelievable result.  Keep in mind that before 2001 Eto’o was rarely used for any squad he had played for.  In 2000 though the forward finally was given the opportunity to start over 20 matches and the striker hasn’t looked back since.  Out of those nine seasons only one did Eto’o not surpass 10 total league goals and in three seasons he has surpassed twenty goals including 30 during his last year with Barca.

If you think Eto’o is just a product of Barcelona then maybe take a gander at his international career for Cameron as well or his brief career with Inter.  The star player has 41 goals in 86 appearances for his homeland in international play.  Not too shabby.

And this season Eto’o has a combined 18 goals in tournaments in league play following up a treble winning season last year. Oh and did I mention that he is the only player ever to win two consecutive trebles with two different clubs.

Now that is impressive.