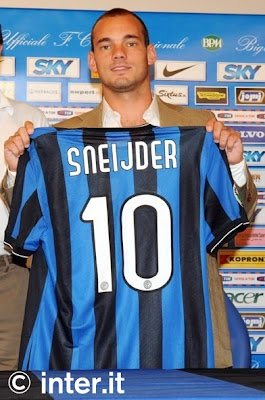 What a crazy year it has been for Wesley Sneijder.  Originally a member of Real Madrid, Sneijder went into this season thinking he had a bunch of new superstar teammates, but unfortunately when all this money is being spent it means that guys like Sneijder become expendable.  The attacking midfielder did not want to leave Spain, but needing the money he was sold anyway.  So Sneijder ended up with a bunch of new superstar teammates in Italy.  The midfielder is not sulking about the transfer so far this year.  already a key component of the club’s offense, Sneijder rewarded his new club with three points this last weekend by putting away the game winner in the 90th minute against Udinese.  The transfer has already paid off for Inter this season.

After a terrible start to the year Francesco Totti is turning it all around for AS Roma.  Totti and Roma are the league’s hottest club right now and haven’t lost in around a month of play.  Also Roma currently shares a joint lead with Inter in total goals scored and much of the credit deserves to go to Totti.  Totti scored two goals last weekend and led his club past Napoli 2-1.

Palermo has not had the strong start they had hoped for and currently reside in the middle-of-the-pack.  But the club did dodge a bullet last weekend when they handed Juventus a 2-0 loss.   Juve is struggling to field a team right now with many key players out of the lineup, but anytime you beat Juve you deserve the honor of Top Performer of the Week.