SATO Serie A Picks of the Week 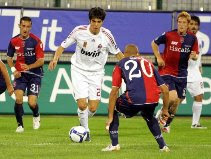 Bologna had a pretty solid start to the year and the squad recently proved their value with an impressive 3-1 win over Palermo.  But this week against Inter the fifteenth place squad doesn’t stand a chance. Inter should continue their unstoppable pace with 4-0 victory.

Milan has been great recently and the squad host the eighth place Cagliari this week.  I like Milan 3-1 at home because they have winning crucial matches lately and they are a top four team by season’s end.

Palermo gets the treat of hosting the number nineteen club in the league table and I expect Palermo to have a record of 5-4-4 by the end of the ninety minutes with a 2-0 victory.  These are the types of games you have to win to finish the season in the top eight spots for Palermo.

Sampdoria is beginning to show the signs of a fallible squad with surprise losses recently and this week the number five club will host number twelve Chievo Verona.  Chievo should not be able to handle Sampdoria’s frustrated offense and the club will click once again with a 3-1 victory.

In twelve matches this season Livorno only has four goals.  That means they only score once every third match.  That makes for some pretty patient football fans if you ask me.  This week the get the treat of playing the surprising league’s worst defense in Genoa.  Genoa has given up 22 goals so far this year so expect this one to have at least a few goals in it either way.  Genoa 3-2.

The Rest of the Matches: