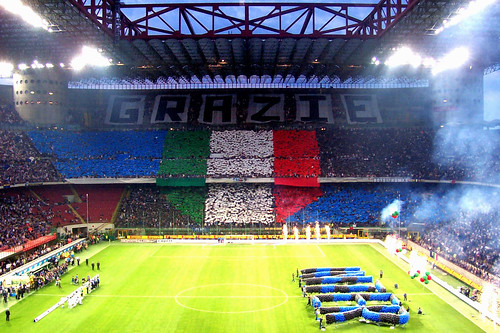 They have the best roster and the best statistics of the first half of the season.  Diego Milito was an excellent transfer and Eto’o will continue to contribute as the season progresses along with Balotelli.  Cesar is the best keeper in the league and the defense of back line is the strongest available in Italy.  Did I mention they have the best coach in Serie A as well?  In other words Inter is really, really good and if the club can beat Chelsea in the Champions League then they would have to be considered favorites for making it to the final match.

Roma just surpassed them in the standings a week back, but Milan has played consistently well this season and the club should easily remain in the top four this season although I don’t think anyone has a chance of stopping the machine, Inter.  Milan has a lot of exciting young players that should continue to improve by season’s end.  Pato looks like he could become a potential Golden Boot winner in a year or two down the road.  Leonardo has also showed a lot of promise in his first year as a coach.

Roma is the hottest club in the league and they haven’t lost consecutive matches since October.  The club has mowed down their competition in the last few months and it appears that they have only got stronger with the addition of Luca Toni from Bayern Munich (although he is hurt right now).  They will probably hold down that second spot and they are the only club that has enough raw talent on the offensive side to match Inter.  I just am not a huge fan of their defense compared to Milan’s.