Santon Considers Future Outside Of Inter 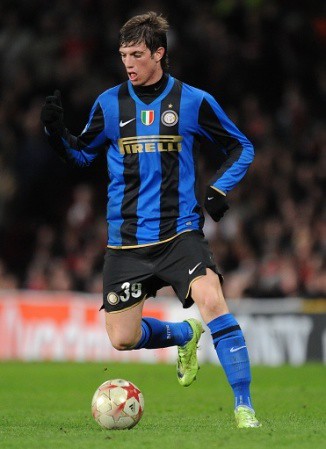 Two years ago, the Serie A and footballing world were stunned by the arrival of a new young talented full back that successfully marked out Cristiano Ronaldo in an important Champions League match, the defender that make the headlines in many Italian paper is Inter Milan’s Davide Santon.

Getting such a high praise since that moment, the full back gets so much attention and pundits start to label him the new Paolo Maldini, however Santon’s luck seems to turn so fast as next January he might leave Inter just to get some playing time.

The defender’s agent himself, was the one that provide the hint regarding Santon’s future, claiming that despite the player wants to stay at Inter, he will consider any interesting offer that could arrive in the January transfer market. The young defender’s inability to attract the attention of Inter’s current coach’s, Rafael Benitez, was being stated as the main reason of him not being able to get the playing time he wishes despite already getting more mature than from the first time he hit the big screen

“We remain on alert and ready to consider any bids that do arrive. For now though Davide is just concentrating on Inter,” Renzo Contratto. “Santon is happy at Inter, even if at this precise moment he is not content with his current situation or about how his Coach considers him.”

Although it can be called as a set back for Santon’s professional career, however it’s probably what he really needed because moving to a team that can provide him enough playing time might be the best way for him in regaining his potential back. It’s been no secret that since last season, he hasn’t really managed to fulfill his potential as he still unable to get a regular starting line-up in the Nerazzurri squad despite his versatility in playing several posisitions.

Albeit he has a huge injury issue that hold back his progress, still the fact that he isn’t being considered as regular starters makes things harder for Santon at Inter as he must keep on working hard on the training ground to even get a call up. Unfortunately, most of the time when he does gets his chance, especially this season, the 20-years-old never really looked like the player he was previously hyped about.

Considering the current Inter condition that hasn’t looked conducive for young players, it will be wise for Santon to take any good offer that comes his way this January. According to some reports there’s a big chance that the Nerazzurri are willing to make a co-own or load deal for the young defender with several clubs such as Genoa, Fiorentina and Parma. However, there are also rumors stating that foreign teams such as Arsenal, Spurs and Chelsea are monitoring the full back’s status.

Should the Nerazzurri choose to “give” Santon for one of the Italian clubs that are interested in the youngster’s service, it pretty much means that the deal will be either the co-own or loan deal. Meanwhile, if the option goes to foreign teams, it’s almost certain that Rafael Benitez’s side are agreeing to sell the 20-years-old as teams like Arsenal, Chelsea nor Chelsea are usually more interested in getting a full ownership over a player rather than loaning them.