Santa Cruz Still Desires Move To Serie A Side Lazio 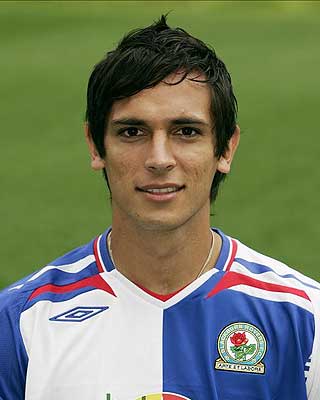 This January expect Manchester City forward Roque Santa Cruz to move to Serie A. The Paraguay national team star was linked to a move to Lazio this most recent transfer window, but the move never materialized due to the two sides disagreeing on the proper transfer fee. So Santa Cruz will remain with the ambitious Blues squad until the window opens back up this January, but the forward did recently declare his love for the Italian league and he did admit that he wants to play in Rome one day very soon.

I had hoped to arrive in Rome. That was my dream. Unfortunately, the deal fell through. There has been a lot of talk of my arrival to Italy and perhaps next time it will materialise. We will see what happens in the next few months. I don’t like to look too far away and I don’t know what Lazio’s intentions are. I have received many offers but I had hoped to play in Rome. I am happy in England but Italian football fascinates me and I would love to have an experience in Serie A.

And Santa Cruz was recently selected to represent Manchester City this upcoming season by making the difficult 25 man roster, but Santa Cruz is not expected to play very often with fantastic forwards across the board for the top four hopefuls and a move this January somewhere where his services could be better utilized is all but a guarantee.   And the forgotten man will likely be sold due to the fact that Manchester City is likely not done spending and also because the squad could use a bit of funds if they were able to successfully sell the player.

And as Santa Cruz said himself, there is no telling where the EPL forward will end up this winter. but if the Manchester City reserve could choose a destination it appears it would be with Lazio in the beautiful city of Rome.