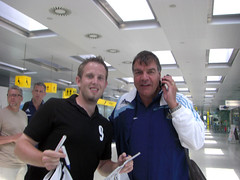 Blackburn Rovers confirmed on Wednesday evening that they are in discussions with an Indian businessman, Ahsan Ali Syed, who has proposed a takeover of the club. The takeover bid seemingly also includes a hefty transfer war chest. Sam Allardyce, the current Blackburn Rovers manager, has been told he will have £100 million to spend on player transfers with the full support of the new board behind him. Big Sam, as Sam Allardyce is affectionately known, must think he is dreaming.

Sam Allardyce developed his reputation after enjoying consistent success at Bolton Wanderers, a previously provincial side he had converted into a considerable Premiership force. In Allardyce’s final season at Bolton Wanderers the team were at one point challenging for a Champions League spot. This was all achieved on a meagre budget. Such success contrasted positively with the clubs modest expectations and after Sven Goran Eriksson vacated the England manager position many people were pushing Sam Allardyce for the international job. Steve McClaren was instead chosen. Sam Allardyce headed to Newcastle United. Success there did not follow and after a relatively disappointing set of results, aligned to pragmatic and defensive performances which the Newcastle fans did not at all appreciate, Allardyce was sacked.

After then being out of the game for a relatively short period Sam Allardyce returned to football at Blackburn Rovers and in two years there he has again found relative success. Installing a disciplined style notorious for its tactical rigidity and dependency on set pieces Blackburn Rovers have again become a force punching way above their relative financial strength.

Ahsan Ali Syed has already stated publicly his belief that Sam Allardyce will be able to perform wonders if supported with a bigger budget, a belief he has reached by way of considering the current success compared to the financial investment provided. Ahsan Ali Syed has also, rather interestingly, insisted that he is investing for the long term. Such a statement was rather predictable after the events that unfolded at Portsmouth last season where numerous owners took over the club for short periods, occasionally just weeks at a time, with apparently little other intention than making a quick buck. Such claims are unsubstantiated and difficult to prove but they are the common thought of Portsmouth fans who know many of the intricacies and details related to their club.

The curiosity concerning Ahsan Ali Syed’s takeover is why should he choose Blackburn Rovers to be the recipients of his investment? Surely there are better supported clubs with a better international image. The obvious riposte would be that Blackburn are available to buy at a relatively cheap price, considering they are an established Premiership side. How events unfold over the next couple of weeks will be interesting. Through Ahsan Ali Syed’s takeover, should it happen, Blackburn Rovers might just yet become one of the big players in the league.