Roy Hodgson – Over Twenty Years in the Making 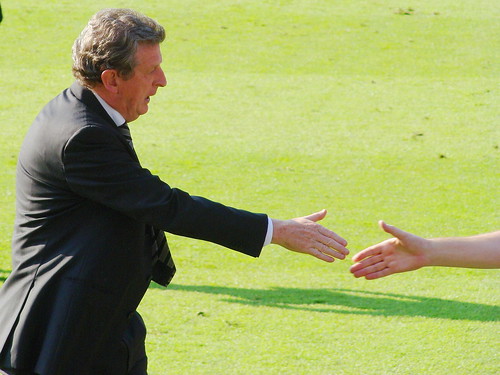 Roy Hodgson began his coaching career in 1976 with Halmstad. Twenty four years and sixteen jobs later, including a very successful stint in charge of Switzerland, he is in charge of Liverpool. He has been working towards this position for two decades. He has had two spells in charge of Internazionale Milan but at neither stage, 1995 or 1999, were the team the type of force they are now. For most of the 1990’s Internazionale Milan were a team who never featured in Serie A title races although Roy Hodgson did lead them to a 3rd place finish and a UEFA Cup final.

Roy Hodgson has always craved a senior position in English football. He has been linked with the English managers job since 1996 and were Fabio Capello to have been sacked a couple of days ago, after England’s World Cup elimination, he would surely have been linked to the job again. Despite recent history Liverpool are one of the biggest clubs in England, probably second only to Manchester United, in terms of popularity, prestige and history. Roy Hodgson has his big job.

Hodgson will bring all of the experience he has accumulated and an astute tactical mind. It is not that Hodgson is a tactical mastermind full of innovation but that Hodgson is a steady hand which has attracted his employers at Liverpool. Whilst Roy Evans had a penchant for the ludicrous, Gerard Houllier a knack for doing something negative and Rafael Benitez a habit for the preposterous surprise Roy Hodgson is a manager who keeps things simple. Players are played in their best positions and asked to do what they are good at. Danny Murphy, formerly of Liverpool and Roy Hodgson’s play maker at Fulham, has vouched for the credentials of his ex-team mates Jamie Carragher and and Steven Gerrard. Despite being the main influences in the Anfield dressing room they are not going to rock the ship. Hodgson will have to persuade Fernando Torres, Javier Mascherano, Steven Gerrard and Yossi Benayoun to stay. In Benayoun’s case it might already be too late if the rumours about a transfer to Chelsea are true.

Hodgson will have little to spend but has proven at Fulham that this is not necessarily a hindrance to success. There is a decent backbone for a successful side. Liverpool owners George Gillett and Tom Hicks wanted an experienced steady hand, in Roy Hodgson they have one that has waited for this opportunity for twenty years.