Rooney Says His Groin Will Be “Fine” 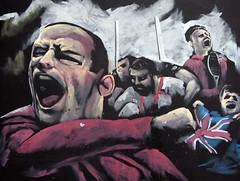 That’s probably about how bad he feels right now.

Wayne Rooney has been plagued by injuries all season and now that the season is nearly over we have more troubles for Rooney.  Though he was just named the English FA Player of the Year he is not without worries.  His groin injury has kept him out of action recently and United does not know if he will be able to return before the end of the season.  Because of this there are some doubts about how fit he will be to perform in the World Cup in South Africa for Queen and Country of England.

Well, he seems to think this isn’t a big deal:

“The groin will be fine for the World Cup, there are no worries about that.  I’m hoping to play for United in the last game of the season.”

You can’t be “fine” on the one hand and be “hoping” to play the final game of the season when the team you play on is THIS close to winning the EPL and you are the best player on said team.  I think he’s a little more hurt than everyone is letting on and he’s freaking out.

Actually, this isn’t super-surprising because I blasted Fabio Capello for distrusting a diagnoses of an earlier knee injury and Rooney just got hurt again.  He may be injury-prone or he might just be having the worst injury year of his life.  Either way, this doesn’t look good for England.

He’ll play in the World Cup unless his legs fall off–but don’t expect much.  This guy is hurting.