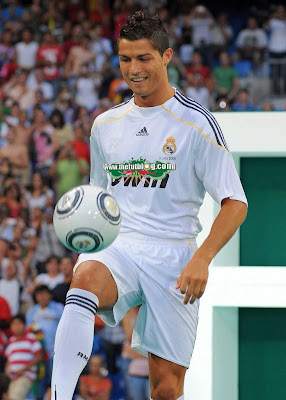 Cristiano Ronaldo may be having his Golden Year. I realize the young Portugal star has already accomplished nearly everything a young superstar footballer can accomplish, but his year he might be doing it like he has never done before.

First off, all of those years at Manchester United have to be partially credited to the system in which the star played. Paul Scholes, Ryan Giggs, Wayne Rooney, etc… these guys had a system in place that worked and Ronaldo became the final piece of the puzzle. Currently at Real Madrid the forward is performing with equally talented players, but the unit have had significantlly less time to play together.

Considering it’s their first year in the new system and the fact that the majority of players on the team have just joined the club in the last 14 months of football, I’d say that Los Blancos are way ahead of the curve. Real Madrid is currently leading the league in goals scored and a big part of the reason why is because of one very famous man. Ronaldo has 12 goals in 9 appearances this season and nearly half of the club’s total amount.

As I said early in the week, Ronaldo could easily end up with 40 goals scored for his side and they could easily win a double with the way they are playing at the moment. Traveling on the road this weekend against Hercules, Ronaldo scored two goals in the last 10 minutes to seal the 3-1 victory. The young superstar’s timely finishes kept his first place side right where they want to be, but this week Ronaldo will be tested not just once but twice by two tough fixtures. First off, it’s AC Milan in the Champions League yet again then over the weekend the powerhouse club will have to play Atletico Madrid.

Let’s see if the goals keep pouring out of Ronaldo’s leg.

My guess is that they will.