Ronaldinho To Be “Tied Up” Before Leaving Italy 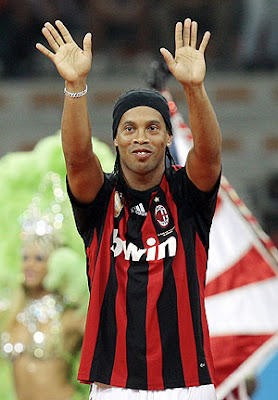 AC Milan attacking midfielder Ronaldinho just might be the most popular player in the world perhaps behind David Beckham. And the Brazilian sensation that was overlooked this summer for the World Cup is often linked with moves to several teams across the globe, but the most often place you hear the Milan man’s name coming up is here in the States with the MLS in a push to make the league more relevant worldwide.

Ronaldinho is still under contract with AC Milan and the Italian club has stressed countless times that they intend on keeping the star until his contract runs out in a year’s time and the club also has stressed their desire to resign the Brazilian once his contract ends. And now that the side has brought in an old national team friend in Robinho from Manchester City, it will be that much harder to pry the player from the Italian giants. In fact Robinho is so loved and respected around the side’s locker room that the new Brazilian Milan player has claimed he will refuse to physically allow Ronaldinho leave for the States if the opportunity ever arose.

We have to stop saying that Ronaldinho will leave for the United States. Dinho will stay with me here, he will stay with us at Milan. I am ready to tie him to the dressing room if necessary. He is not just a champion, but a leader. And for me he is a real friend. You can trust him, he is one who will never betray.