Ronaldinho To Be Benched Against Ajax? 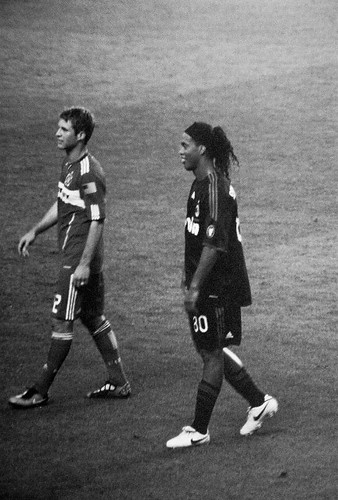 For big clubs, playing three days in a week is a common thing to do considering their hectic footballing agenda, that’s why rotation policy is something common done by coaches to keep the team firing in all competitions.

Although many star players doesn’t usually like the policy, it looks like Ac Milan’s Brazilian star, Ronaldinho, might be getting them this midweek as the Rossoneri will be playing against Ajax in the UEFA Champions League match day 2.

Traveling away to Amsterdam three days after playing a tough match against Genoa in Serie A brings Milan’s coach Massimiliano Allegri into the decision to rotate some of his stars in order to keep them fit and surely make the Rossoneri play more consistent. According to Italian paper, Corriero Dello Sport, Ronaldinho could be one of the players to be dropped by Allegri considering his inconsistent performances lately.

The Brazilian does looked a bit tired in this last two matches after playing non stop week end week out this September and also playing nearly 90 minutes for all of the games except the latest one against Genoa where he was being subbed in the 70th minute. This decision isn’t because of there has been any feud between the former Barcelona star with Allegri, but simply because of the hectic schedule the Rossoneri been facing lately.

With only one day rest after each games that they had, Milan does looked a bit troubled in previous matches especially in the league as they only managed two victories in Serie A so far. Previously Allegri did have a bit problem in rotating his squad especially the front players because of the injury to Alexandre Pato and fitness issue that Robinho had, now with the latter seems to slowly getting his condition in shape, the ex-Cagliari coach might finally be able to execute the policy.

After playing against Ajax, the Rossoneri will already have to play this weekend against Parma in Serie A away at Ennio Tardini. Surely playing two away games in a week is a difficult thing for the Red and Black players who need to keep playing well and getting all three point in both of those games, that pressure to keep on winning could also make the tiredness easily felt by Milan squad.

Although there is no official confirmation on whether Ronaldinho will indeed start from the bench, still the rotation policy is a must for Milan considering how tired their players looked lately. Other that can also be benched according to the latest reports in Italy could be Gennaro Gattuso, Andrea Pirlo or Kevin Prince Boateng who have also been played a lot lately.