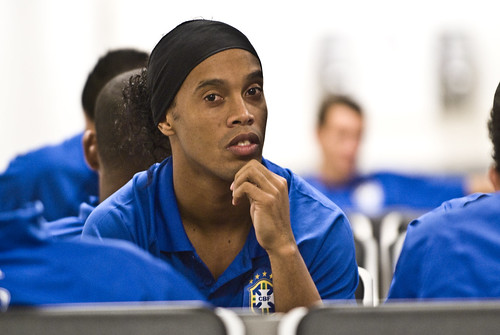 Ronaldinho has made a lot of news recently with his potential big move away from Serie A, but earlier this week AC Milan made it very clear that they will not allow the attacking midfielder to part this season. And although the midfielder will be allowed to leave next season it appears one of Italy’s best league players is sticking around for at least 2010.

And with news that Ronaldinho is injured circulating around this morning, I think it safe to say that the attacking midfielder will not be transferred anytime soon. The flashy Brazilian apparently may have torn a muscle in training yesterday and Ronaldinho was forced to leave practice early and was set to have a scan sometime today.

Here is the statement on AC Milan’s website regarding the injury:

Last night, at the end of the day’s second training session at Milanello, Ronaldinho complained of pain in his flexor muscle. This afternoon the Brazilian will undergo medical checks.

No word yet on the significance of the injury, but at the worst the Brazilian playmaker would likely miss around four to six weeks of action. The season starts at the end of August so there is a chance that Ronaldinho could miss that first home match against Lecce, but the biggest issue will likely be if the Brazilian can quickly return to form considering he will miss most of the preseason and training drills before the season starts.

But Ronaldinho will miss some time even if it is mostly on the practice facility. The midfielder has already been ruled out of this weekend’s Emirates Cup and is set to miss a strong of matches over the next month if he remains injured.