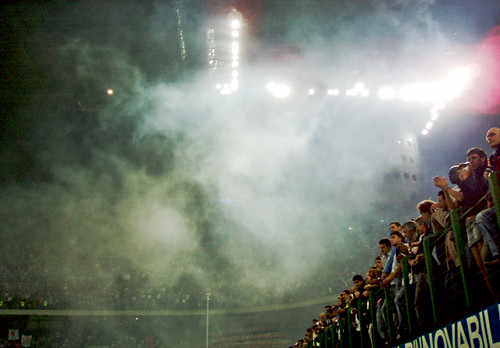 Another re-scheduling apparently happened again for Serie A match between As Roma against Inter Milan as after only being relocated from 20.45 kick off into 15.00 on Saturday, the Lega Serie A have to move the day into Sunday as well.

This situation arrived because the snow problem apparently still can’t be solved on Saturday despite having the match being pushed forward into an evening kick off, as at the moment the weather already showed some serious situation.

There’s a fear that the match won’t be played at all this weekend but apparently according to the latest news from Italy, things can be sorted out on Sunday, which is a good news for football fans considering Roma v Inter is one of the most anticipated match this week. Obviously, the fans around the globe that watch from television must be content with the fact that they can’t enjoy the comfort of watching two, three big games in a different day but having the games being played is obviously more important.

Aside from the Roma against Inter, there are also another important match which was being re-scheduled due to bad weather issue, that game is Ac Milan’s encounter against Napoli. That tie was supposedly set for 20.45 kick off on Sunday but got pushed up to 15.00 on the same day, despite the Rossoneri was actually asking for a postponing instead.

The bad weather in Serie A this winter have really been disturbing the competition as until now there have been several matches that got postponed because of this situation. A condition that raises the worries of many people, hoping that a solution can be found immediately not only for this current month but for next season, so there will be no more canceled match as of today.