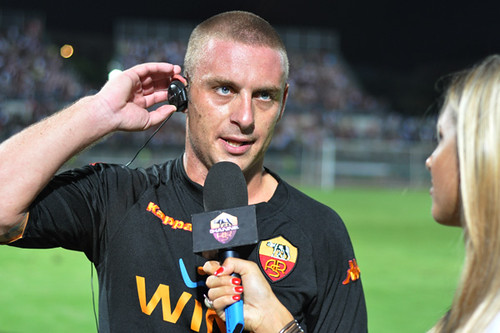 As Roma have a high hope in keeping their talismanic midfielder, Daniele De Rossi, at the club but it seems that they are ready to prepare the worse scenario as according the Giallorossi’s new owner, Thomas Di Benedetto, the club won’t forced De Rossi to do anything.

Di Benedetto acknowledged that there are huge interest for the Italian international from many big clubs at the moment and with the player still haven’t sign the contract extension being offered, the chance of losing him keeps getting bigger.

Roma’s director, Walter Sabatini, previously stated that he would rather wait for De Rossi to make up his mind even if it would take until the final days of his contract, which set to run out in 2012, instead of selling him this summer. But it seems that Sabitini’s boss understand that as much as they wants to keep the player at Roma, but if the 28-years-old have other intention it would be difficult to stop it especially since his contract is expiring at the moment.

“Daniele is a Roman and a Romanista 100 per cent, a great player, an international and a great figurehead for us. Therefore we hope he can play for Roma to the end of his career, but ultimately it’s his decision. If he had different ambitions, then we’d have to take that into account,” Di Benedetto told Italian media.

Reports claimed that the likes of Manchester City, Chelsea and even Ac Milan are interested in the Roma vice captain, especially City who have made their interest public and might plan to make an offer should the capital club gave up on their attempt in keeping De Rossi. The Blues were previously linked with a move as the Italian international is being set as Michael Essien’s replacement, meanwhile, the Rossoneri have always been a keen admired of the 28-years-old midfielder and with the player are in the last year of his contract, the Italian champion might also make their move soon.

In other news, Roma’s chance in acquiring Danish international defender, Simon Kjaer, seemingly hit a stumbling block as the player’s current club, Wolfsburg, apparently changed the contract agreement making the Italian club rethinking the deal, although the player has already done his medical with the capital side. According to the Giallorossi’s representative the first deal with the German club was a loan with a buy out option but apparently, Wolfsburg changed the deal in the last minute by making in an obligation to purchase which the Roman find a bit difficult to conclude at the moment and unless the term is being returned to the previous deal than the deal is pretty much off.

“We had an agreement with Wolfsburg for a loan with option to buy, then they changed the terms and we thought it opportune not to ratify the contract,” said general manager Claudio Fenucci. “We consider the player to be of good quality and if Wolfsburg go back to the original contractual terms, then we are ready to conclude the transfer.”