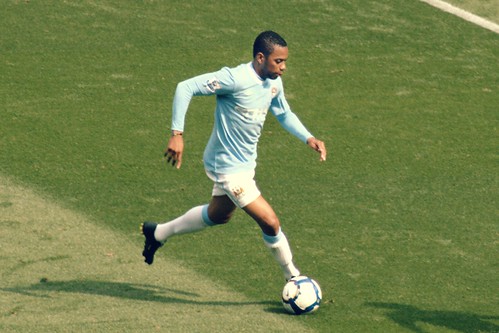 Ac Milan made a surprising effort on the transfer market in the last weeks of the window as they not only managed to acquire Zlatan Ibrahimovic but also Brazilian star, Robinho, right on the last day of the transfer window.

The former Machester City’s man arrival was indeed a big surprise not only to the media and fans but also for Milan’s coach, Massimiliano Allegri, who didn’t even see it coming.

“I didn’t expect a reinforcement like Robinho. He is a player of great caliber,” Allegri said to the press. “We are talking about a wonderful present from Berlusconi, who I would like to thank again with my heart.”

Allegri is definitely excited with Robinho’s arrival as he would have more firepower in store for him and could allow the former Cagliari coach to rotate his front players a lot and still doesn’t lose the quality of Milan’s attack. Moreover, it some games the tactician might consider in playing his fantastic four attacking stars, Ibrahimovic, Pato, Ronaldinho and Robinho although it would really need some tactical adjustment to keep everything balance.

With Robinho’s arrival, Milan’s fans can also breath easy this days as should they lose Alexandro Pato through injuries like last season, the former Santos player would be more than a capable deputy for Pato. Not only that, the 26-years-old player’s arrival this season along with Ibrahimovic have provide a significant effect on the club and fans as the seasonal ticket’s sales are increasing since the signing of the two superstars.

According to previous reports, Robinho was brought by Milan from City with the amount around 18 million Euro plus bonuses, and the Brazilian will be expected to play at San Siro until four years. Milan’s vice president also stated that the money made to purchase the former Real Madrid striker comes from the club owner himself, Silvio Bersluconi.