Robben Doesn’t Have To Be Sorry 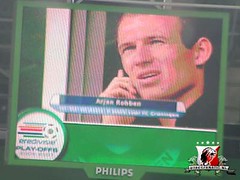 Arjen Robben is not used to being subbed-in for.  In fact, it’s possible that he is subbed-for so little that he can hardly remember what it feels like from match to match.  So, I can understand the following scenario.

He was subbed in the final 5 minutes of Bayern’s win over Lyon.  Well, he didn’t enjoy that idea and when he came to the sideline he avoided Louis Van Gaal’s outstretched hand of congratulations.

Remember that Robben had already scored what proved to be the game-winner.  Now, he didn’t want to be taken out and that was because he was in the heat of the moment.  He said:

“I had a really good feeling and felt I was really in the game and I could have scored another goal.  Therefore, I could not understand why I was being removed.”

“But I have got to apologise to all of the fans because I shouldn’t do that. I should have been more professional, but this is just part of my mentality – I always want to win.”

Arjen, you can only do what you can do.  You were on a roll.  You had already scored.  The team was playing well and you wanted to be out there with your teammates.  If you just want to win that’s fine.  In fact, it makes me want to be a Bayern fan.  You know why?

Not EVERY soccer player on the planet wants to win.  Some just play for themselves or the paycheck.  Some just do it because they’re bored.  Some could give a crap about their teammates, their team, or their fans.  You CARE—and that’s cool.