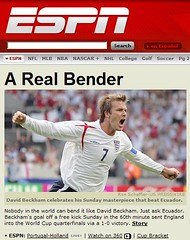 Second, let me apologize for making you read that terrible attempt at humor. You see, Rick Reilly (who I hope runs unopposed for all those Sportswriter of the Year awards he keeps winning) has decided to write one post about soccer every four years to prove he knows that the World Cup (the biggest sports spectacle on Earth) is in full swing. Here is the problem.

Rick Reilly knows nothing about soccer. Moreover, Rick Reilly is not funny (well, not anymore). He hasn’t been funny for a very long time. I won’t let this latest sad attempt at humor go unchallenged though. Since he treated us to the 10 things he finds “annoying” about soccer, let me tell you about the 10 things I find “annoying” about his calamitous “commentary” on soccer:

1. It’s Been Done Before

How many more years will we have to endure columns by smarmy American sportswriters about how soccer is “strange” (aka “gay”) and not as good as “American” sports? Seriously? I feel like every crank who needs to churn out a piece around the Cup just goes with the same “soccer sucks” angle. We used to demand originality from our press, but I guess in the modern world it is easier just to cut and paste old, asinine ideas than write new ones, huh, Rick?

Would it kill you to be creative again?

I would need an abacus to keep track of the number of places Reilly’s critiques of the Cup aren’t just wrong, but completely lacking any basis in fact. Sure, some soccer games are low-scoring, but that doesn’t give Reilly carte blanche to state every game features one or no goals. Moreover, how can people blow the vuvuzelas during “timeouts” when there are no timeouts in soccer? I could go on and on here (like Reilly often does), but I think you get the point. He sure doesn’t.

He doesn’t get much about soccer, does he?

3. It Reveals His Lack of Sensitivity, Cultural and Otherwise

I could have written an entire post about just how mean-spirited much of his column is, and not just when it comes to South Africans and their love of their plastic horns. He also manages to insult Norwegians, Northwest Airlines bag handlers, “American Idol” and Jonas Bros. fans (though both categories likely overlap considerably), NBA players, and, of course, all of the billions of soccer fans across the globe. We get it, Rick, you think we are silly. Point taken.

One point, which is how many you get for a tie @ the Cup. But you hate ties!

4. It Reveals His Lack of Knowledge of the Sport

In addition to his confusion over timeouts, Rick explains that “stoppage time” is a “mystery” known only to the ref. Not really, Reilly. You see that big board that fellow on the sidelines holds up at the 45 and 90 minute marks? That board shows how much stoppage time will be played. If you had ever watched an actual match, you might know that. But you haven’t, have you? No it’s easier to write a crappy article and confuse people than to watch a real game.

5. It Reveals He Can’t Write A Post Without Mentioning His Wife

Seriously, Rick, just once, can you please write a post without mentioning your new wife? Do you get a note from your editor telling you to make the column a few words longer and always throw in some reference to her to keep her happy? Why else would you insist on giving her a shout out in every freaking column you write (or so it seems). We get it, you like your new wife. I don’t remember you mentioning your old one so much, but you were better back then.

6. The Jokes Are Terrible

You used to be funny. Now it seems like you must spend about 15 minutes on each column. If your stuff was any blander and based in foolish stereotypes you could probably get a network TV deal. Seriously, the only thing your column was missing was a “Jersey Shore” reference and it would have hit all the inane things all comics feel the need to reference in every single monologue and/or skit. Come up with some good stuff soon, Rick. You know, like the old days?

7. The Terrible Jokes Are Stolen And Not Credited

It’s one thing to steal a joke and at least give a shout out to the guy who said it first. It is another to take someone else’s joke, put an ever so slight alteration on it, and then not credit the guy at all. That is what Rick did when he took the “ties”/Father’s Day thing (which was said by a commentator on ESPN two days ago) and didn’t give the proper credit to the originator. By doing so, he pretends that he was the one clever enough to come up with the joke in the first place.

Maybe he didn’t hear that joke, in which case, what a coincedence! I doubt that though…

You should be ashamed of the joke, Rick, but more so of stealing it.

He has the vuvuzelas on his list three times. I get it, Rick, you put them there three times because you think they are really annoying. Or at least that is what you would have us believe. Perhaps they appear three times though because you couldn’t come up with 10 things that are actually annoying about the Cup and you had a tee time approaching and just said “screw it”. Notice I didn’t need redundancy to come up with 10 annoying things about your column though.

9. Rick Reilly Is Redundant (get it?)

Reilly has been churning out these same (alleged) “laughers” ever since he left SI for ESPN. It was like he decided to go from sports journalist to full-blown comedian when he left print for the worldwide leader in sports television. The problem is, Reilly’s jokes are so recycled they can only please Al Gore at this point (ouch, that terrible joke sounded like one Rick would have come up with). Mr. Reilly, either come up with some new jokes or stop writing new columns.

10. It’s Another Example of His Downfall

Rick Reilly was once deserving of awards for his writing regarding sports. Read some of his stuff from SI back in the 1990s and you will see why. He was witty and cogent. What he has become now is a humorless hack. His columns read like laundry lists of terrible jokes. The man could once write with majesty, but now he has become a pompous prick. Sorry, Rick, but when it comes to covering soccer, you flat out suck. Just stay away from the beautiful game, Reilly.

And Rick, if you are reading this and thinking, “Well, you aren’t funny and can’t write either, Yank”, guess what? I wrote this in 45 minutes and got paid basically nothing for it. While you may not have spent much more time on yours, you make millions a year to crank out your terrible tripe. You owe it to sports fans to try harder to write like you used to. I am sure ESPN right now thinks you owe it to them. Don’t end your career like a Van de Velde major (I know you love golf similes).

You still have time to get up and down and save your career.

Because right now, you are terrible. In fact, you only put one sentence in your entire column concerning soccer that made any sense:

No, Rick, you definitely don’t.