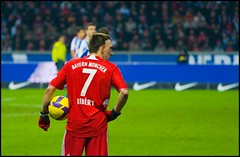 Franck Ribery was already suspended for the May 22nd Champion’s League final where his Bayern Munich squad is to take on Inter Milan.  Now, there may be some really bad things going on for Ribery that will only serve to create more tension in the Bayern locker room and further Inter an edge over their German counterparts.

The “escort girl” in question is now 18, but she claims that last year her clients included Franck Ribery and Karim Benzema.  Um, ouch!

Let’s just say that she’s telling the truth–which is not confirmed and these are only allegations–then this will SHAKE the Soccer world.  Right to its core.

You can’t tell me that one of the–if not the–best players in Germany being caught in a teen prostitution ring won’t just kill their club.

Look at Bayern–they were already reeling from Ribery’s suspension and now they have to deal with these allegations WHILE they beg UEFA to lift his suspension for what they believe was a clean tackle.

I can only say this–if you’re Benzema or Ribery you need to get your affairs in order.  The overpriced world you live in has a microscope on your 24/7 and you would think that these players would have figured it out.  None of us are perfect, but in a world of camera phones and secret recordings people in the public-eye need to be smarter.

Plus, you have to pay for it?  No way!  That’s what makes it so hard to believe.  I can’t see any pro Soccer player NOT having women hanging all over him all hours of the day and night.

This is weird and needs to be resolved quickly.  If the authorities are reading–please work this case fast.  If these men are innocent then we need to know about it.