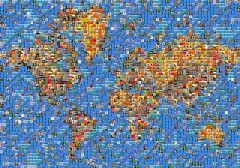 Over the last 30 months, I have provided you with plentiful posts about the world and the way people play that crazy game with your feet all over it. Whether you call it soccer, football, futbol, calcio or kick the kiwi, it is the same beautiful game. Over the years, I have written about all the earth’s major leagues and tourneys, like the Champion’s League and the World Cup, and I have always done so with integrity. Um, wait. Nope, I actually mostly wrote about WAGs.

10. The Greatest Fans in EPL History: This series covered the ten Premier League teams who had the best frenzied fanatics (and celebrities) supporting the team. As a single example, I will provide you with my piece on Everton.

9. WAGS, WAGS, and More WAGS: I covered several wives and girlfriends of players in my STO WAGS of the World series (like Sarah Brandner), the EPL’s Hottest WAGS, and my epic Italy’s Eleven WAGS From Heaven series.

8. Mission 2010: Your mission is to read my entire series on the agents from USA, England and Italy who I predicted would represent their team at the 2010 World Cup in South Africa. This message will self-destruct in five seconds.

7. A Sonnet for Sepp: Do you know who I think is as mad as a hatter? No, not Johnny Depp, I am talking about Sepp Blatter. Years ago I wrote a sonnet for that highest FIFA boss, who is known as a man to fear and never cross. Oops!

6. The Finest Finals: I enjoyed educating you on many of the “Finest Finals” in every league and competition across the globe, but my best series were the Finest World Cup Finals, Finest Champion’s League Finals, and Finest FA Cup Finals.

5. Soccer’s 10 Most Shocking Scandals: In this ten-part series, I went “outside the lines” (at least as far out as Bob Ley) and delved into the stories that shocked the world of soccer. It was tabloid journalism at its worst (so therefore best).

4. 2010: A Soccer Odyssey: This was one of my wackiest literary ventures while writing for STO. If you are not a fanatic of Stanley Kubrick’s masterpiece, 2001: A Space Odyssey, this post likely didn’t compute for you in the least.

2. The Bard’s Top 100 Soccer Players of All-Time: Alas, my bawdy Bard will never get to fulfill his entire series of limericks on the Best 100 Soccer Players Ever. In fact, today on PLTO I had to drop the curtain on the whole shebang.

1. Yes, Even More WAGs: If you want serious literary journalism, you can suck it. If you want Wednesday WAGs, here are Elena Barolo, Maria Mazza, Alessia Fabiani, Eva Gonzalez, Nerieda Gallardo, Caroline Celico, Melanie Slade, Abigail Clancy, and – yes – even Victoria Beckham. There are a lot more where those came from too. Don’t judge me!