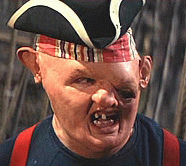 The Sin: When I was a kid, I didn’t know Spielberg’s The Goonies was one of the weirdest movies ever. I mean, the bad guys literally keep their “special” kin chained in the basement where he has absolutely nothing to do. As he was a pretty idle guy, it was fitting they named him Sloth. After all, according to Proverbs 19:15, “slothfulness castesth into a deep sleep; and an idle soul shall suffer hungry.” It makes sense, right? He was awfully hungry for Chunk’s Baby Ruth.

The Sinners: Why am I rambling about The Goonies? I have no idea. This post is about sloth, which is synonymous with laziness, the abhorrence of work, and a strange mammal. In order to succeed @ the World Cup, the US MNT will need to work hard every day until the tourney is over. Which specific guys need to increase their zeal? Well, Jozy notoriously despises practice almost as much as Allen Iverson. I’ll also throw Freddy Adu under the bus here.

The Saints: Our two truant young guns could learn a ton from some other gents on the squad – men who combat sloth (and maybe even sometimes packs of mutant sloths) via their incessant energy. I am referring to LD, who rarely tires due to his keen fitness. I am also talking about Brian Ching, who never takes a second of a game off. I will also credit Bradley the Younger for his fervent dedication. He bounces around the pitch. Jozy? He sort of lumbers.

The Sermon: “HEY… YOU… GUYS…!”, all this talk about sloth has my mind drifting back to The Goonies again. Maybe the villains didn’t name him Sloth because he was lazy. Instead, maybe it was because he sort of looks like the sloth at left. Who knows? All I know is that the US MNT players must commit their full focus and exert all of their energy toward their preparations for the 2010 World Cup. They need to avoid the couch and keep their fitness.

So, no, Bob “Skeletor” Bradley won’t be allowing them to enjoy any Baby Ruths like Sloth and Chunk for a little while.

Well, unless the player promises to burn off the fat via marathon sessions of the Truffle Shuffle, naturally.