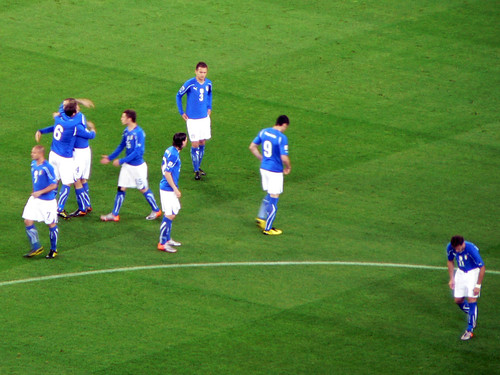 New Italian national team coach, Cesare Prandelli, prove his words to give a fresher look to the Azzuri team as he called up some interesting new players and also those who were left out by Marcello Lippi.

Among some of the names being summoned for the upcoming friendly against Ivory Coast, the likes of Antonio Cassano and Mario Ballotelli are the ones that surely catch many attention.

The two “bad boys” were being considered the creative talents that the Azzurri really missed in the last world cup and surely after Prandelli calls them up, everyone would expect to see what kind of spark that Lippi have been leaving out in South Africa. The two talents, especially Cassano will surely be the player that Italy will be counting on a lot for the upcoming Euro qualification round as he is currently being considered as the next talisman.

Prandelli himself has already had high hopes on the Sampdoria’s trequartista as he believes that Cassano is much more mature this days and ready to lead the Azzurri’s attack in the “new” Italian national team.

The former As Roma man is undoubtedly talented but his attitude in the past has been the main issues that puts him in and out of the national team, surely looking at his recent run in Sampdoria, people can finally hope to see a much more consistent and influential Cassano.

“Cassano has reached maturity now. It is an extraordinary opportunity for him. His Azzurri adventure can be very consistent if he feels himself to be a protagonist and a focal point for his teammates. Prandelli stated.

As for Balotelli, despite all of his antiques, the former Fiorentina coach is willing to consider his enormous potential and talent rather than the controversy that the Inter Milan striker’s caused. Prandelli believes that with the right approach Balo can finally put his footballing talent in the field and leave out all of the nonsense behind him.

“As for Balotelli, all these lads here have great talent, but they must also prove they are grown-ups. Too often we treat them like spoilt children,” Prandelli said. “I want to create a feeling of empathy with players like him, to let him know I am here, I am listening and what can I do to help you?

Now since the stage is set, there will surely be a pressure for both Cassano and Balotelli to prove their worth in front of many football fans that Italy still have what it takes. Everything will also depends on how can Prandelli maximize all of the potential that those two players have so they can bring a positive impact for the team.

Beside from Cassano and Balotelli, some other interesting “new” players that were called up by Pradelli are the likes of Luca Antonini, Sirigu, Viviano, Davide Astori, Andrea Lazzarri, Lucchini and Carvalho Amauri.
Here is the complete list of Italian players being called up for Tuesday’s friendly game against Ivory Coast: