Pepe Considers Playing As A Right Back 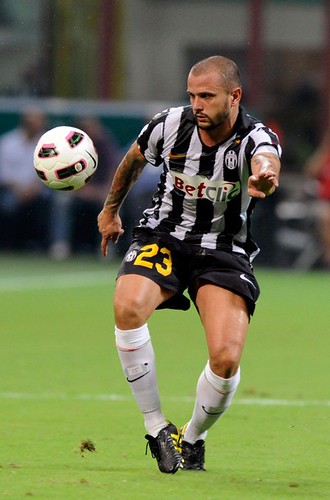 Shifting position from a winger into a wing back is already a common practice in today’s football as there have been many success stories that comes from this kind of switch such as, Gianluca Zambrotta, Cafu and Luca Antonini.

Based on those success stories and also limited playing time, that practice might soon be done by Juventus’ new signing, Simone Pepe, who is ready to take the role despite seeing it as a future project.

“If I was asked to play as a full-back then I’d be ready. Sometimes I think about that as a project for the future.” Pepe said.

The former Udinese player acknowledge that the fact he is having problems in getting the starting line-up spot to play in his original position at Juve is one of the reason he considers being shifted into a right back. However, Pepe himself is still working hard in getting his place back as a winger and still curious about the reason he isn’t picked as the first choice winger in the team despite acknowledging that he hasn’t been playing that well.

“I know that I haven’t played well so far, I am getting back to work in order to earn my place back,” Pepe added. “I don’t know why I’m not first choice any more.I can’t explain it,”

Despite Pepe’s readiness to play a new role, it would seems that the Italian international would have to wait a little bit longer for that opportunity as Juventus’ coach, Luigi Del Neri, wants to try the new role in the training ground first. The coach does believe that the Italian international has all the tools needed to play as a right back in the future especially should there’s an injury problems that trouble the Bianconeri’s wing back sector.

“I don’t think I’ll be testing Pepe in that position during the game. Maybe in training, as he has the attitude that can work with that role,” Del Neri said.

It’s interesting to see whether this talk of a position switch for Pepe might be something real or just nothing more than a idea from the player that comes from his desperation in getting a starting line up position. Should the Italian international does get the chance, off course there will be another question on whether he can really play well in the role as playing as a wing back will require much more defensive duties than playing as a winger.