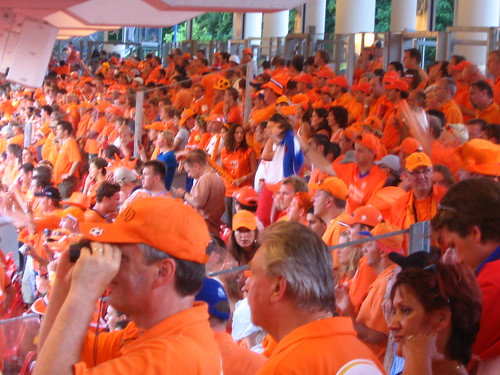 Well you can change that list ladies and gentlemen because this Clockwork Oranje squad is out to reverse the curse and when was the last time that the Flying Dutchmen won such a huge match over a Cup favorite?  Maybe the 1970’s when they lost two straight Cup finals?

But this Clockwork Oranje has something special, something different than ever before.  It has one of the world’s greatest players and nobody really knows it yet.  His name is Wesley Sneijder.

Sneijder is the forgotten man when you list the world’s best players, so I guess it is fitting that he plays for the Flying Dutchmen (an underrated team).  I’ve said before that what he did at Inter Milan this season was truly the most impressive of any new player on any new team.  Sneijder was quite simply the difference maker for Inter and he set up goals with brilliant long passes, nice touch passes around the box, the chip into the box from the corner, and of course the laser goal from time to time himself.

Of course Sneijder’s achievements have been overlooked and even last match Robin van Persie threw a fit when Sneijder was kept on in favor of the Arsenal man.  In truth at the moment he is the better player and is more critical to his Dutch side.  In the beginning of the league season that might not have been the case when van Persie was averaging about a goal a game for the Gunners and Sneijder was just adjusting to life on a new team in a new league (Real Madrid made him the forgotten man for them too).

But perhaps once more the little Dutchman is proving his presence on the pitch to be enormous.  Has any other single player contributed as much as Sneijder has this summer?  There’s Villa, Messi, maybe Klose, and Forlan as deserving candidates as well.

But in my mind Wesley Sneijder is proving to be MVP caliber once again.  After all he did just conquer the Cup favorites.  You can add it to the list.