Oriol Romeu to return to Barcelona? 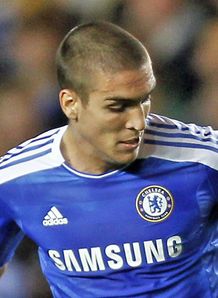 Like Gerard Pique and Cesc Fabregas before him it seems that Oriol Romeu is already flirting with a return to his boyhood club. Despite only signing for Chelsea in the summer of 2011, just a few months ago, his rise has been well noted. Last season he was in the Barcelona B side and this year he is a first team starter for Andre Villas-Boas’ Chelsea side. More than that, in fact, he has been one of their best performers so far this season.

The Spaniard’s agent has spoken publicly about his client’s desire to play for the Barcelona first team regularly, mimicking what was previously said by the likes of Cesc Fabregas and Gerard Pique. It appears the allure of playing for Barcelona is just too much for any professional football player at the moment, let alone one who had progressed through their youth ranks. Unsubstantiated reports have claimed that Barcelona have a buy back option, giving them the right to buy back Oriol Romeu for a predetermined fee. The clause was supposedly included as part of the deal when Barcelona decided to sell the youngster to Chelsea. Chelsea have denied the claims, saying that Barcelona only have an option to buy the player if Chelsea no longer wish to keep him.

The youngsters agent was quoted as saying ”Maybe it will be more convenient to stay for another year and then return in 2013.”  . It is hardly the type of news Chelsea fans wanted to hear or the type of commitment they might expect from a player who has only just broken onto the scene.

Signed for a nominal fee, close to £6 million, Andre Villas-Boas supposedly only originally intended using the young Spaniard as an alternate for John Obi-Mikel, but after John Obi-Mikel had made some important and costly mistakes in the early part of the season the Spaniard found himself thrust into the starting line up. Once there he flourished and never looked back, appearing confident, eager and talented, it seems a wonder the young Spaniard was cast aside and not needed by Barcelona. That is until we remember the immense amount of talent currently available to Pep Guardiola and Barcelona in the middle of the field, with the club from Catalan already able to choose from a number of players, including Xavi, Andres Iniesta, Sergio Busquets, Cesc Fabregas, Seydou Keita and Thiago. Understanding this, therefore, it is no surprise that Oriol Romeu was surplus to requirements at Barcelona for the time being.