One Argentina Teammate Thinks Messi Is No Leader 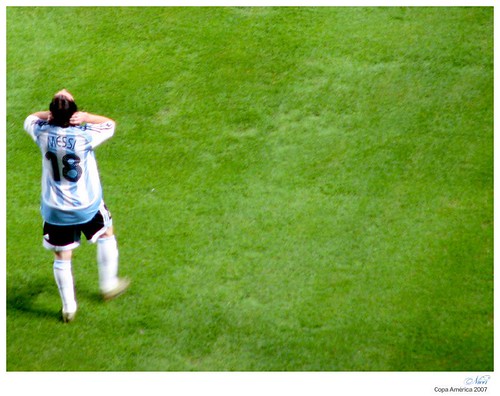 Argentina teammate Martin Palermo called out Lionel Messi on Monday claiming the Barcelona star lacked the leadership mentality of a legendary player like Maradona and even questioned his loyalty to his birth nation.

The thirty six year old Argentine striker was one of the six on the active roster for Maradona’s squad this summer, but the old man only saw a few minutes of action in this summer’s grand event. But despite the fact that Messi is one of the most successful active league players around, led Barcelona to their first ever treble a year back, and is currently the reigning FIFA Player of the Year; his international career was still brought into question by one of his respected teammates.

Palermo made the following statement about Messi:

Messi isn’t Maradona. To me, Messi does not have Maradona’s mentality. He’s not prepared to carry the team. He (Messi) is not one to take the role of leader. He won’t do it because he’s not used to this position. He grew up in another way, he’s lived differently. He’s been with Barcelona since he was 12.

Pretty cold statement and a tough person to compare a twenty-something year old guy too. Of course Messi hasn’t reached the summit that Maradona did for the Argentina side yet and it is also true that Maradona is well known for coming from the poverty stricken slums of Argentina; whereas Messi grew up under the influence of the La Liga giant. But to call out the young forward to this great of a degree is a bit ridiculous considering the Barca man could potentially play in three or four more Cups before he is through.

And Messi does have the advantage of playing for a premier league side that has plenty of talented players to deliver him the ball into the box and if Messi played for Spain this summer I think it is safe to say that the team would have still won the World Cup. But part of the problem this summer was that Messi was out of position with the Argentine squad and didn’t have the correct cast to create World Cup title winning football.

The defense was mediocre at best, the coaching below average, and Messi’s performance was obviously hurt by these vital factors. He may not embody the national team’s unquestioned leader yet, but the guy is only twenty three years old.

And what was Palermo doing when he was twenty three? Certainly not leading his nation to a World Cup title.