Not All African Presidents Are Bad 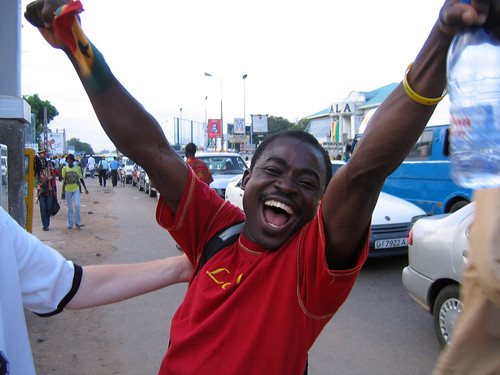 There have been a lot of debates stirring up over the last week about Nigerian President Goodluck Jonathan and his supposed punishment he was hoping to place on his Nigerian national team for failing to advance out of the first round of the tournament.

The controversial politician wanted a two year ban on international football for his side.  FIFA stepped in though and claimed that if a ban did take place then the nation would be suspended even longer than two years by the governing body.   So the Nigerian officials have wisely backed off of that silly threat for now.

But not all African politicians are complete cancers to football.  Some actually do the right thing.  Take Ghana President John Atta Mills for example.  The Ghana representative recently graced his national team’s presence by hosting an honorary lunch banquet to celebrate the most successful African side’s quarterfinals achievement.   The players were all awarded $20,000 as well for their fine effort.

The president made this statement at the lunch function:

You deserved to be honored because you have made Ghana and indeed Africa proud by your performance.  You did not win the World Cup but, through your performance, you carried high the flags of not only Ghana but Africa.

And Ghana has every reason to be proud of their results.  They did better then any other African team this summer and they were the only squad from the hosting continent to advance to the quarterfinals.  Of course they lost to Uruguay in the most heartbreaking way possible via the penalty shootout.  And of course they were even closer to winning then that due to having a missed penalty at the very end of extra time as well, but despite the heartbreak it was still an impressive run.

Africa should be proud of the Black Stars.