No Vuvuzelas Will Be Heard This Champions League 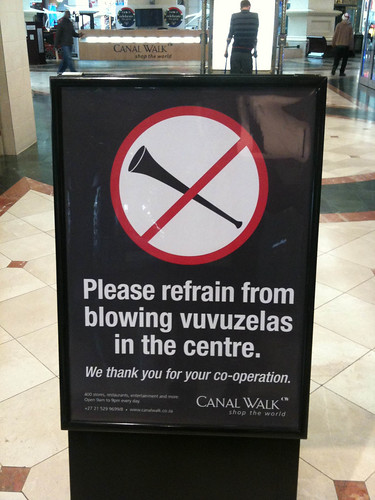 The UEFA has banned the popular South African horn from entering stadiums this upcoming year. All 53 nations involved in the Champions League and European Championship have been ordered to disallow the blaring musical instrument into their venue’s stands this season.

And most sporting events have followed suit this summer including the large majority of Premier League stadiums. However the Premier League itself refused to do so and only suggested to the various club’s arenas that they create their own ban. And even last week when I was at an NFL preseason game I looked at the back of the ticket and sure enough the stadium had banned the vuvuzela.

The horns became one of the biggest debates of the World Cup this summer when the loud blaring bee-swarming sound created conflicts for television coverage and communication on the pitch between footballers and officials alike. Many officials demanded that FIFA should immediately ban the horns at the World Cup, but this never happened due to the fact that the instrument was a native celebratory part of South Africa’s culture and FIFA did not desire to tamper with the hosting nation’s traditional sporting culture.

However it appears that the hated horn will remain there due to it’s potential affect on other nations sporting culture. Several excuses have been made for why the vuvuzela was disallowed from an arena including that it impeded PA announcements over the loud speaker regarding evacuations and other emergencies, it could be used as a violent weapon, and my favorite from Fulham because it is very loud and annoying.

The UEFA claims that the horn was outlawed because it impedes the traditional songs sung by Champions League fans at the event and therefore negatively affects the various traditions brought forth by club’s fans at the event. Also the organization admitted that the horns could affect the referees attempt to blow a play dead and the horns simply distract fans from enjoying the game.

The vuvuzela’s only home appears to be from its birth nation in South Africa where the horn was originally invented a long time ago as a way of bringing spread out villages together for town council and other community assemblies.