No Escape For Eto’o 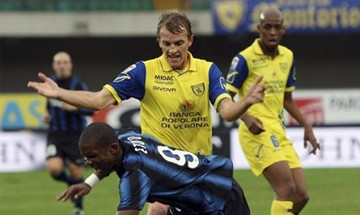 Just as it was predicted, there’s no escape for the unsporting behavior that Inter Milan’s striker, Samuel Eto’o, did to Chievo defender Bostjan Cesar in both team’s latest meeting in the league last weekend.

In the game that the Flying Donkey won 2-1, the Cameroon striker was spotted head-butting the Slovenian defender in the first half but walked away without any caution and even went on to score the Nerazzuri’s only goal in the match.

However, just as what happened to Juventus’ winger Milos Krasic not so long ago, the league’s disciplinary committee didn’t oversee the incident and now have decided to punish Eto’o with a three match ban along with a 30.000 Euro fine. This punishment will definitely bring a big blow for Inter’s progress in the Serie A as the three match ban means that the Cameroon international won’t be playing any more games in the league considering that the Nerazzurri will have to play in the FIFA Club World Cup in December.

Considering the huge dependency that Inter currently have with the ex-Barcelona striker in scoring goals, the next three games that the Nerazzurri have will be a more than difficult task for Rafael Benitez side considering Diego Milito hasn’t been performing as well as last season. The Cameroon striker’s absence means that other players needs to step up their game especially in providing the final touch that have been missing in Inter’s last few matches.

However, as always the final decision might be officially set yet as Inter could still make an appeal against this decision in order to at least reduce the punishment that has been stated the their striker. It would be interesting to see how could the under-fire coach, Benitez, would cope in losing his main goal getter that has already scored 16 goals for Inter until this date.