No Escape For Chivu 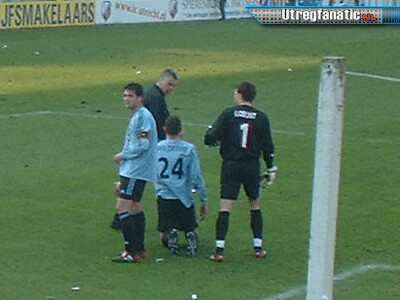 Inter Milan may feel that the tides have turn again under Leonardo as they managed to secure another victory against Bari in the midweek, however the disciplinary situation for their player is back under questioned after Christian Chivu followed Samuel Eto’o footsteps in received match bans.

In a rather similar story as Eto’o, Chivu was spotted swinging a punch towards a Bari player, Marco Rossi, which was not spotted by the referee resulting the player getting away from a possible red card decision.

However, just as the as Eto’o, Chivu’s action wasn’t going to escape the lega’s disciplinary panel as through video evidence, they decided to give a four match ban for the Romanian international. This sentenced is much more longer than the one that his teammate had few months ago as at the time the Cameroon international only had three match suspension. The decision can be called pretty fair considering what the former As Roma defender did to Rossi is surely an unsporting and violent behavior that could actually received more punishment.

Chivu himself has already admitted his mistake after the game and also publicly stated his apology towards Rossi, Bari, the fans, his club even including his kids. The Romanian didn’t explain the reason behind his disgraceful action as he only said that it’s something that he can’t really explain, not helping his case, the video evidence also didn’t really give any clear insight at what might trigger the defender in laying a punch towards Rossi.

“It is difficult to explain, I am here because I want to apologise to Rossi, with all the dignity that I have left.I apologise to everyone, above all my two children who one day will watch this clip,” Chivu stated.

Aside from getting punishment from the disciplinary panel, the Romanian international could also face personal treatment from Inter themselves as the Nerazzurri’s coach, Leonardo, did stated that Chivu’s issue will also be handled internally. Although the action could still be nothing more than a stern warning to the troubled player, there’s always a chance that the Romanian could received a fine or more time on the bench even when his ban finished.

I will talk to him about that incident, It’s not right and we will deal with the situation internally,” Leonardo said.

This embarrassing incident won’t only drag Chivu’s credibility down but it could also troubled his club as they now have another man short in defense for few matches just because a stupid action on the pitch. Making the punching event more controversial, the fact that the incident happened when the game is still at 0-0, Bari could actually argue that should the Romanian defender got the sending off he deserved, the final scoreline might not be in favor of Inter.