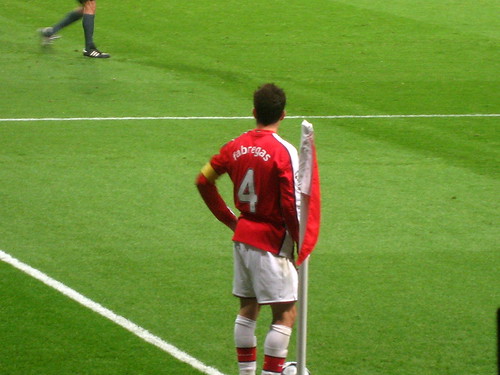 Arsenal and Barcelona tangled for their first of two legs at Emirates Stadium, but Barcelona won the day 2-2.  In aggregate scoring I’m not sure how Arsenal plans to get that back.

Oh, did I mention that Cesc Fabregas probably broke his leg in the match and now Arsenal will be without him in the second leg at Camp Nou?

Basically, when Arsenal was having a hard time with Barca before Cesc was injured you figured that they could make some adjustments at the half and work it out.

After losing Cesc we now know that this is Check Mate.  I’d like someone to tell me how Arsenal goes on without Cesc.  Is there anyway possible that they can rebound?

Amir Nasri will have to stand in for Cesc in the 2nd leg AND for the rest of the EPL season and that just does not bode well.  Arsenal was already very lucky to be as close as they were to United and Chelsea–now, they’ll be lucky if they don’t start a freefall.

It’s got to be really debilitating to lose your superstar and putting in a “deputy” isn’t going to help.

Moreover, if you’re Pep and you want to make sure your side wins out at Camp Nou all you have to do is:

Don’t let up on the guy at all and he probably won’t be able to handle the pressure.  Not in a situation like that.  Not on the road in Spain.

It’s a shame that Arsenal bowed out.  I really enjoy the Gunners and this just makes the second leg alot less exciting.  Somehow, if we gout Cesc in a wheelchair…

Nah, nevermind.  He’s done for the season.  Get better soon my friend.  We want to see you repeat this run next year.