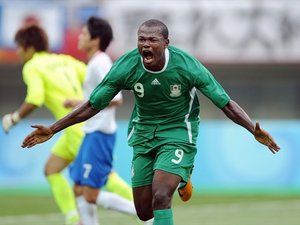 FIFA has suspended Nigerian soccer from international play following an investigation into the Nigerian Football Federations affairs and the country is expected to forfeit their upcoming African Cup of Nations qualifier this weekend due to the lack of an elected group of officials to properly represent the nation.

The country originally came under great scrutiny following an early World Cup exit this summer that prompted the nation’s president, Goodluck Jonathan, into claiming that he would suspend the squad from international play due to their poor results. FIFA has rules that prohibit national governing bodies from controlling their national soccer federation’s upcoming matches, so the president was forced to call off those plans and FIFA announced that they would be closely monitoring the countries business regarding the sport and their football governing body.

Last month is was revealed that four of the Nigerian Football Federations executive officers were basically stealing money from the funding of the organization and all four officials await court hearings regarding this pending case. Apparently the four officials (including the president and VP) saved money that was supposed to be used towards the squad’s transportation and hotel rooms, but the federation elected to support the team by giving them inferior travel coaches and even used over $800.000 dollars on travel expenses of over 200 delegates to the World Cup in South Africa. Of the 200 plus guests only 47 were elected officials of the nation’s football federation. Many of the “guests” were considered to be friends, family, and girlfriends.

Nigerian soccer as a whole is expected to experience negative consequences from this decision and new committee members have yet to be named by FIFA or the nation.