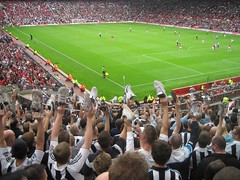 The story is quite remarkable. Newcastle United defeated Aston Villa 6-0. Yes, newly promoted Newcastle, generally expected to struggle all season because of a lack of offensive fire power, managed to score six goals in one match against one of the better sides in the division. Andy Carroll scored three by himself. Unfortunately for the Saint James’ Park faithful and Andy Carroll Newcastle won’t be close to winning the league at the end of the season and the majority of the Premiership’s following will be more interested in reading about a Manchester United draw. It is unfair on Newcastle but typical of the modern Premier League.

In the game at the Craven Cottage Fulham were deserving of the draw. New manager Mark Hughes set out his team in a bold and attractive formation with positive intent. It is indeed true that the game was close to ending as a contest in the final minutes when Manchester United were awarded a penalty. Had it been scored the score would have been 1-3, but it was missed, by Nani, and within moments the score was 2-2. It is also true, however, that when the game was delicately balanced at 1-1 Fulham ought to have taken the lead in the match when Zamora had a glorious opportunity one on one with the goalkeeper which he edged wide. Simply put, a draw was ultimately the fairest of possible results. Sir Alex Ferguson protested afterwards that Ryan Giggs, not Nani, should have taken the penalty but it was all obviously in vain. When the dust has settled Sir Alex Ferguson might no longer see this result as two points dropped but rather as one point gained. In the previous two seasons Manchester United have lost by an aggregate of 5-0 at Craven Cottage. Leaving London with a point is an improvement this time around. Beyond the entertainment, comeback and worthiness of Fulham’s achievement there is still a sense of injustice that this game should dominate the evening and following morning headlines. Newcastle United just won 6-0 in the Premiership!

When Chelsea defeated Aston Villa by several goals towards the end of last season it was hailed as an example of effective, efficient attacking football. Chelsea were universally applauded. Newcastle United, in only their second match in the Premiership since promotion (the other being a 3-0 defeat to Manchester United), perform in a similar manner against the same team, Aston Villa, and nobody appears as impressed. Surely this achievement by the Magpies is even more impressive.