Napoli Pulls Away At Second Place As Lazio Stumbled Again 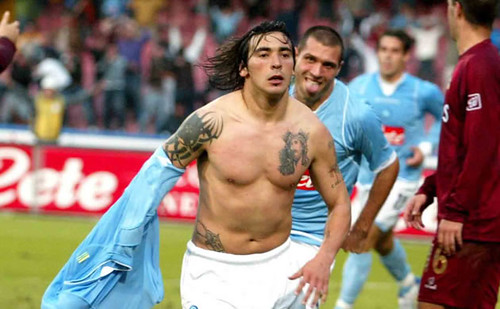 The title race in Serie A gets more interesting especially after Napoli continue to threaten Ac Milan’s throne at the top of the league after picking an important three point against Bari this weekend.

Not only that the Partenopei are currently pulling some gaps with the teams behind them as Lazio dropped points again after losing against Bologna, allowing As Roma keeping their third place position after their win yesterday.

After having a rather inconsistent results in previous weeks, Napoli, gets themselves back on winning ways with a comfortable 2-0 victory against bottom half Bari, that were playing with 10 men midway in the second half. The Partenopei fans should really thanked their two South American stars, Ezequiel Lavezzi and Edinson Cavani, who got the two goals that gave the all important three points that Napoli needed.

Looking for a victory to stay closer to Milan in the top of the table, Napoli started the game on the attack and their intensive pressure finally paid off in the 38th minute when Lavezzi scored a wonderful goal with a flick of his heel. The goal pushed Bari’s spirit to improve their game in search of the equalizer, however their job gets really difficult after the home team had one of their player, Alessandro Parisi, sent off after picking up his second yellow card midway in the second period.

Having a man advantage allowed Napoli to take full control of the game and eventually sealed the game four minutes before the final 90 minutes after their current top scorer, Edinson Cavani, who tapped in Lavezzi’s cross to score one of his easiest goals of the season. The victory allowed the Southern Italian side to take a breath in maintaining their second place with 40 points, two points away from Roma that jumped into third place with 38 points.

One of the reason that Napoli had a breathing space in the second place is because of Lazio’s failure to secure the three point they needed after being beaten by Bologna 3-1 at Renato Dall’Ara. Sergio Floccari’s early strike failed to push the away team’s spirit as the financially troubled Serie A side showed their comeback strength by replying with three goals from Gaston Ramirez and Marco Di Vaio’s brace.

Playing away against a troubled side like Bologna, Lazio should have had their head held high especially after the Biancocelesti managed to take an early with Floccari’s goal five minutes into the game. However, things went wrong for the away team after that as it was the home side that had the upper hand especially after Ramirez equalized in the 36th minute.

The tides surely turned after that equalizing goal as three minutes after Ramirez’s striker, Di Vaio started the misery for his former club as he puts Bologna on the lead with a wonderful unstoppable solo run before smashing Lazio’s net. The home team’s lead frustrated the away team as they lose their temper in the end of the game resulting in a sending off for the Biancocelesti’s defender, Andre Diaz, after getting involved in a brawl.

Playing against 10 men makes things easier for the Rossoblu as they immediately scored the third goal after the sending off with Di Vaio successfully capitalizing Lazio’s defender, Giussepe Biava’s mistake. The former Parma striker waltzed pass Biava before sending the ball home and ensured Bologna’s victory against one of the Scudetto challengers that started to lose their ground in the top position in the league.